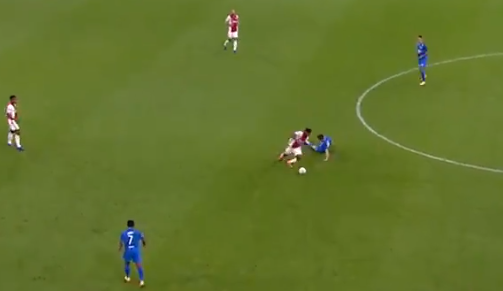 Ghana midfielder Mohammed Kudus has had an explosive start to his Ajax career with incredible performances in his two Eredivisie games.

Ajax ran away with a 2-1 win, with Kudus at the centre of everything good for the Dutch champions in their clash against Vitesse Arnhem.

There were many highlights from the game, but there was a particular incident that stood out among the lot.

This involved Mohammed Kudus who dropped dead a Vitesse player.

The Ghanaian picked up a pass from a colleague and then pulled out from his bag of magic tricks, the Johan Cruyff turn to sit Matúš Bero who was trying to get the ball away from him.

After the embarrassing dribble, Kudus burst forward before laying off a threaded pass to a colleague.

The Dutch champions took off well as Quincy Promes handed his side the lead in the 21st-minute.

However, things got complicated as Alvarez got sent off forcing Ten Hag to withdraw Kudus into a more defensive midfield role.

With Ajax in need of magic after Vitesse pulled level in the second half, Kudus provided it, picking up a pass from central midfield, then beating his opponent for pace before setting the ball up for Anthony who smashed home to hand Ajax all 3 points.