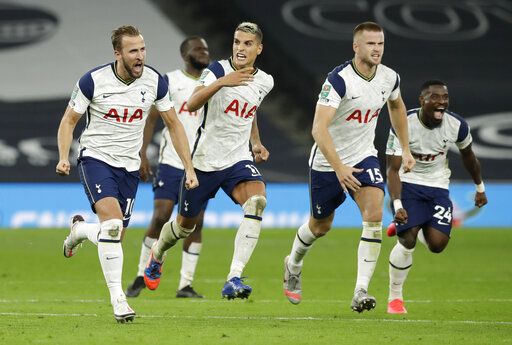 Mason Mount missed the crucial spot-kick as Tottenham Hotspur came from a goal down to beat their London rivals Chelsea on penalties to seal their place in the quarter-final of the Carabao Cup.

Both managers rung the changes from the weekend’s Premier League games, but Timo Werner kept his place in the Blues line-up and struck his first goal in English football after a mistake from Tottenham debutant Sergio Reguilon.

With a Europa League play-off to contest on Thursday, Tottenham’s only survivors from the 1-1 draw with Newcastle on Sunday were Hugo Llorisand Eric Dier, with Dele Alli omitted from the squad once more.

Edouard Mendy replaced Kepa Arrizabalaga for his Chelsea debut but had nothing to do in a first half the visitors dominated, with the exception of a comfortable save with his feet to deny Erik Lamela‘s straight forward shot.

Tottenham were much improved after the restart, with Reguilon forcing a good save from Chelsea’s new shot-stopper, who then had an anxious moment after flapping at a corner delivery.

But he could do nothing with Lamela’s late equaliser, who poked home after Reguilon made amends with a fine cross to provide the assist.

With extra-time scrapped the tie went to penalties. The first nine spot-kicks were exemplary before Chelsea’s fifth taker, Mount saw his hit the post and go wide.

As Tottenham began a week in which they have three games to play in five days, it was hardly a surprise Chelsea picked the stronger line-up.

And although Mourinho gave the impression his side were beaten before a ball was kicked – stressing the Europa League play-off with Maccabi Haifa on Thursday was the priority – his fringe players actually emerged as the better team on the night and were deserved winners on the whole.

Mourinho had said in his pre-match conference: “I would like to fight for the Carabao (Cup) but I don’t think I can.”

Again, it proved to be a case of the Portuguese playing mind-games, as Spurs – after a painful first-half performance – came out and played with real intensity, levelling the game and then winning the shootout, piling more misery on Lampard, who will have more questions to answer as Chelsea’s slow start to the season continues.

Another cup game is hardly what Spurs need, as their fixture list grows ever more congested – but a derby victory is always important.

Scored the equaliser, netted from the spot. A battling performance and deserved to be on the winning wide.