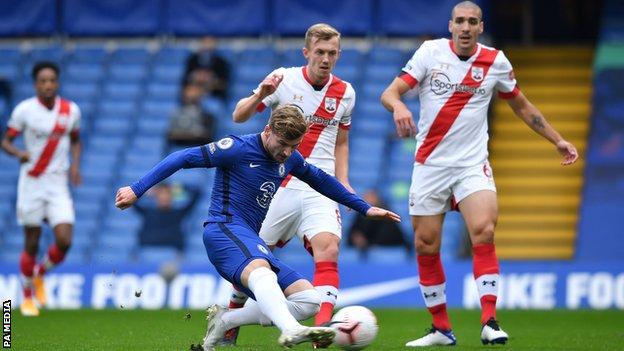 Jannik Vestergaard headed in a dramatic injury-time equaliser as Southampton pegged back Chelsea to claim a point in a Premier League thriller at Stamford Bridge.

Ralph Hasenhuttl’s side looked to be heading for defeat but Danish defender Vestergaard was in the right place to flick home a Theo Walcott shot from the edge of the area.

Chelsea were in control at 2-0 up through two superb Timo Werner goals – the first courtesy of a sublime dummy which bamboozled Jan Bednarek before drilling in, and the second as he lobbed the ball over goalkeeper Alex McCarthy and nodded home.

When it looked like the hosts were cruising, Southampton hit back as Danny Ings went round keeper Kepa Arrizabalaga to finish and Che Adams punished dire Chelsea defending to smash home an equaliser.

The Blues responded just 121 seconds later with Werner sliding the ball across the box for compatriot Kai Havertz to convert an easy finish which seemed to be the winner, but Vestergaard’s late effort sealed a draw.