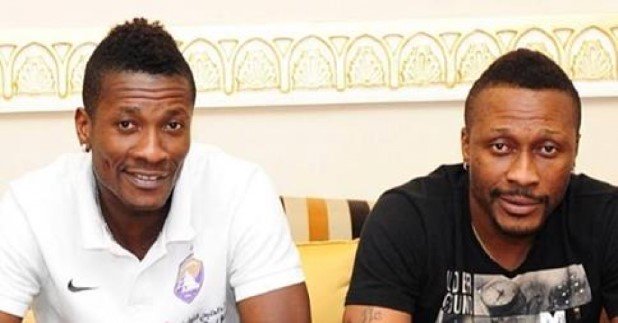 Asamoah Gyan says the allegations of assault levelled against him and his brother are not true and describes the audio of the incident being circulated as “out of context”.

The alleged incident happened on Wednesday, October 14, 2020, with a man identified as Godwin Martey accusing Asamoah and Baffour Gyan of assaulting him after a disagreement during a tennis match.

In an interview with Asempa FM, Gyan says he never hit the victim and says the recording of the confrontation is being taken out of context.

“The audio is out of context. You know that out of anger, people say a lot of things but the audio does not tell the full truth. You cannot just, based on an audio, determine whether I hit him when you did not see what happened.

However, I am basing on the audio to apologize to all my fans that I did not act right with my choice of words but everything I said was out of context.

I know my fans are disappointed I am sorry for the words I used out of anger but I can confirm that I did not him.”

Asamoah Gyan in recent months has found a new hobby in tennis and has been involved in some tournaments as well in a bid to stay fit.

According to the narration of the victim, the singles game which was set up by a mutual friend took a sour turn when the CEO noticed that all key points of the contest were going against him.

He suspected an attempt by Baffour Gyan to rig the game in favour of his brother.

“Most of these controversial points that were in my favour, Baffour Gyan was giving the point to Asamoah Gyan. At a point, I became a bit uncomfortable with it. So there was a particular point that to me was obvious that the ball was good, and Baffour Gyan insisted that the point was for Asamoah Gyan”.

It was in the heat of the moment that Baffour Gyan charged on Godwin Martey and laid hands on him. He narrated to Joy Sports.

“Then he came down and came to hit me that ‘my friend go there, I say go and play’. He was hitting me to go and play,” he added.

“As he was hitting me, Asamoah Gyan came in support of what Baffour was doing – assaulting me.”

Mr Martey said that even after he complained to Asamoah Gyan that he was being assaulted by Baffour, Asamoah Gyan replied by saying: “Yes, you deserve it.”

The victim, Godwin Martey says he has the whole incident on tape and will sue the ex-Black Stars players.

“I’m suing big time. I’m going to sue… The fact that Baffour threw a challenge to me that I can go to any court, any police station, they can’t do anything, that actually gave me more adrenaline to prove to them that the police force is still a good force.

“I will sue tortuous liability on civil case and I will press for the police to also prosecute them criminally. I will fight this to my last blood.”

Andre Ayew scores yet again in Swansea's loss to Huddersfield