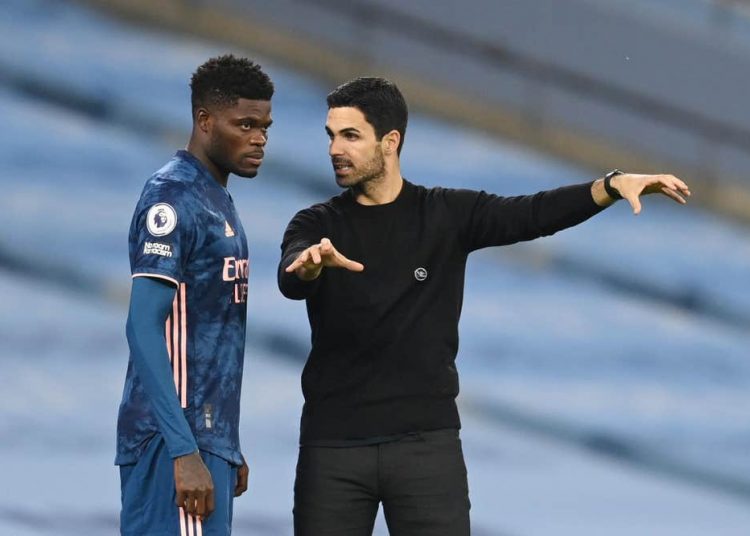 Arsenal Captain, Pierre-Emerick Aubameyang believes Thomas Partey will prove important for the club, with the Ghana international possessing qualities that the Gunners have been missing for a long time.

Partey after making his full debut in the Europa League for the club against Rapid Vienna, has been compared to Arsenal legend Patrick Vieira, with Owen Hargreaves labeling the 27-year old’s debut as one of the best he had ever seen.

Arsenal’s new number 18, made an explosive start in central midfield, winning balls for his new side while leaving opponents for dead with the use of his power, pace and nimble footwork.

Mikel Arteta believes there is much more to come from the Ghana International, with the Arsenal Head Coach ready to hand out a prominent role to the 27-year old at the club.

Aubameyang believes the younger players at the club, will be able to learn a lot from Partey.

Gunners skipper Aubameyang told the club’s official matchday program of a new recruit: “He has integrated so well in the squad.

“He is kind, calm and smiley. On the pitch, we have seen already seen what he will bring us in matches.

“He is so strong physically but yet so good on the ball as well. We didn’t really have a profile like this in our squad before.

“In terms of ball progression, beating the press, going forward, he will be very important for us.

“My family is from Gabon but I also have some roots in Ghana where Thomas is from so we are family too!

“It is good for some of our younger players as well to have a player like him, of his calibre at training.

“They will learn a lot from him.”