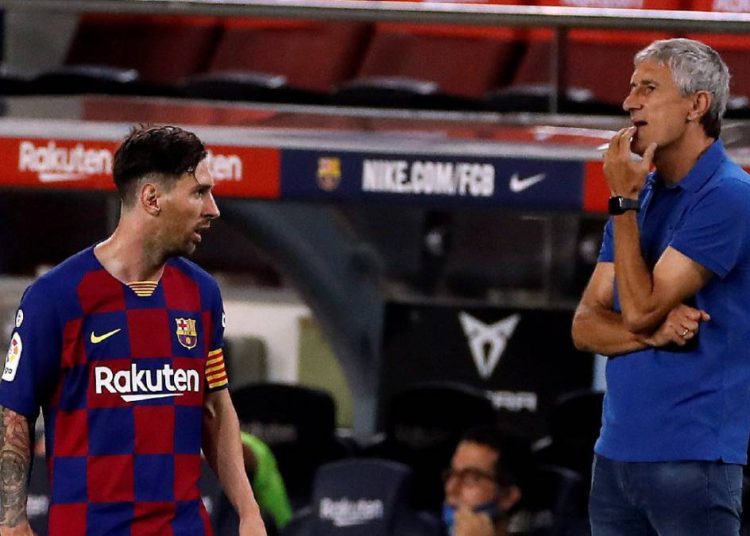 Former Barcelona head coach Quique Setien has admitted Lionel Messi is ‘difficult to manage’ after struggling to stamp down his authority on the Argentina superstar during his disastrous spell at the Camp Nou.

Setien lasted just six months in the hotseat after replacing Ernesto Valverde at the turn of the year, with the humiliating 8-2 defeat at the hands of Bayern Munich in the Champions League back in August sealing his fate.

A trophy-less campaign resulted in Messi attempting to force a move away from the LaLiga giants, only to make a sensational U-turn when it became apparent he would become engulfed into a legal battle with Barca.

In an In an interview with former Real Madrid coach Vicente del Bosque for El Pais, Setien gave an insight into what managing a six-time Ballon d’Or winner is like and hailed the 33-year-old as the greatest player of all time.

“I think Messi is the best of all time,” Setien said. “There have been other great players who have been great, but the continuity that this boy has had throughout the years has not been had by anyone.

“Leo is difficult to manage. Who am I to change him if they have accepted him as he is for years and have not changed him.

“It’s something inherent in many athletes that can be seen in the Michael Jordan documentary [The Last Dance]. You see things you don’t expect.

“He’s very reserved but he makes you see the things that he wants. He doesn’t talk much.”

Setien also admitted that, in hindsight, he made decisions that weren’t in the best interests of the club as a whole during his ill-fated stint at Barcelona.

He admitted: “After leaving what I am clear on is that at certain times I should have made other decisions, but there’s something above you: the club.

“And it is above the president, the player, the coach. It’s the club and the fans. They are the ones to whom you owe the greatest respect, and you have to do what is most convenient for the club as a whole.”