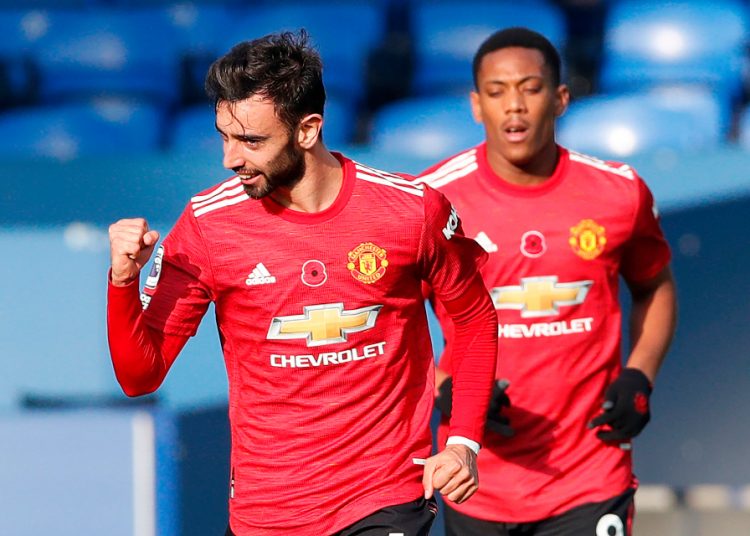 What crisis? Manchester United eased the pressure on under-fire Ole Gunnar Solskjaer with a massive 3-1 win at Everton on Saturday.

Two goals from Bruno Fernandes turned the game on its head following Bernard’s opener, before the Portugal star set up Edinson Cavani, who bagged his first United goal late on.

In fact, their comeback victory means they’ve actually enjoyed a better start than last season – when they finished third.

That will help to quieten rumours of Mauricio Pochettino replacing Solskjaer at Old Trafford, which dominated the build-up to the match following two abject displays against Arsenal and Istanbul Basaksehir.

The Red Devils, in particular Fernandes, delivered the response their manager needed, perhaps desperately, with a much better display at Goodison Park.

However, the afternoon started in a troublesome fashion as United were undone by a long ball yet again.

Jordan Pickford’s goal kick was flicked on by Dominic Calvert-Lewin and Bernard produced a brilliant finish from the edge of the box to give the hosts an early lead.

But the visitors quickly hit back, and produced two brilliant passing moves to go ahead in the game.

talkSPORT pundit Trevor Sinclair went as far as to describe the goals as ‘tiki-taka’, the football made famous by Barcelona in their pomp under Pep Guardiola.

“Everton looked very tight, but it was a delicious cross from Luke Shaw and Bruno Fernandes connects perfectly.”

The second was another silky move, which Marcus Rashford tried to finish off, but failed to get anything on Fernandes’ cross as it went in via the post.

A cagey second-half followed and Everton banged on the door late on, but only left space in behind for substitute Cavani to roll in his first goal since signing for the club on a free transfer in the summer.