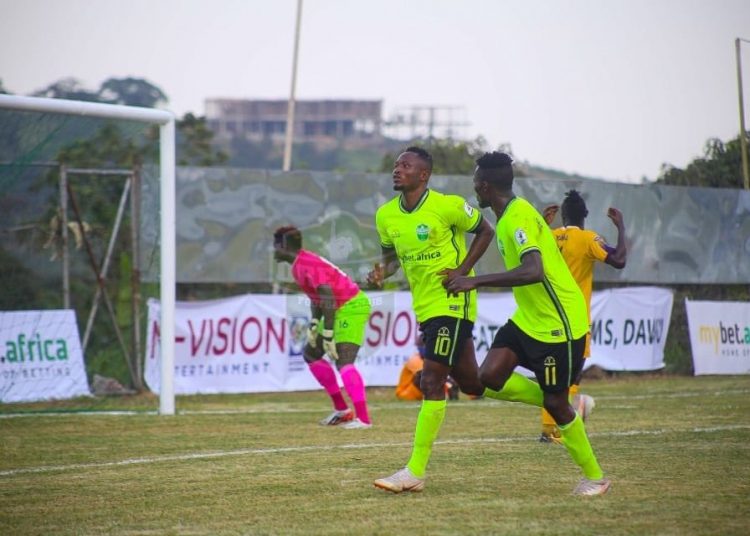 Dreams FC recorded their first win of the 2020/2021 Ghana Premier League season with a 2-1 victory at home to Medeama SC.

The Dawu-based club took the lead in the 16th minute through former Hearts of Oak forward, Joseph Esso, before Kwadwo Asamoah, who previously played for the home side equalized for the visitors in the 74th minute.

It seemed as though the match was going to end in a draw until Ibrahim Yaro brought Joseph Esso down in the 18-yard box, resulting in a penalty which was converted calmly by Issah Ibrahim to hand Dreams their first win of the season at the Theatre of Dreams.

At the Golden City Park, Emmanuel Clottey scored in the last minute from a free-kick to hand Berekum Chelsea a 1-1 draw with Kumasi Asante Kotoko.

Kotoko took the lead in the 25th minute through Kwame Opoku, who nodded the ball into the net from close range.

The visitors, for the most part of the match, looked like they were going away with all three points but it was not to be as Clottey came off the bench to deny Kotoko their first win of the season.

Kotoko captain Felix Annan picked up an injury in the 90th minute after a bad tackle from Jordan Opoku and was replaced by Kwame Baah.

King Faisal came from behind to secure a 1-1 draw at home to Aduana Stars.

The visitors took the lead in the 41st minute through Yahaya Mohammed. Faisal piled pressure on Aduana after the break but could not find an equalizer.

Aduana went down to ten men in the 69th minute after Isaac Kwain was given a red card for a clumsy challenge.

Frimpong Boateng put the hosts back on level terms with a powerful shot from outside the penalty box in the 70th minute to snatch a draw for King Faisal.

Elmina Sharks gave away an early lead as they were held by Liberty Professionals at the Nduom Sports complex.

Benjamin Tweneboah put the hosts in front in the 27th minute but Liberty had the opportunity to draw level after they were handed a penalty following a foul on Abdul Razak Boame but failed to convert as Sharks goalkeeper, Lord Bawa Martey saved the spot-kick taken by captain Liberty captain, George William Ansong in the 60th minute.

Sharks defender Mensah was then sent off following a second yellow card.

In the 90th minute of the game, substitute Kwaku Karikari drew the visitors level to earn Liberty their second draw of the season.

Karela United secured the first win of their campaign with a 1-0 win at home to Inter Allies.

Taylor Diawiase was on target again for the home side through a penalty in the 76th minute.

Karela have now garnered four points from their first two games of the season while Inter Allies have only managed to pick up one point following their draw with Dreams FC.

In Saturday’s only game, Bechem United recorded their first win of the 2020/2021 Ghana Premier League season with a 1-0 victory over WAFA.

Following their 1-1 draw against Liberty Professionals in match week one, it was Man of the Match in that game, Hafiz Konkoni who headed in a Steven Owusu cross to hand victory to the home side in the 28th minute.

WAFA had headed into the game hoping to make it two wins out of two but did not succeed in unlocking the defence of Bechem United.

The Dade boys dominated the first half and were eventually rewarded after Gladson Awako’s freekick was deflected into the net in the 44th minute.

Maxwell Acquaye did not fail to convert from the spot after Olympics were awarded a penalty in the 51st minute to double the lead for the home side.

Samuel Abbey sealed the win for Olympics in the 83rd minute to hand Legon Cities their first loss of the season.

Techiman Eleven wonders also secured their first win of the season with a 2-0 win over Ebusua Dwarfs.

Emmanuel Tettey Nortey put the home side in the lead through a penalty in the 31st minute before Prince Okraku sealed the deal in the 90th minute.

In the final game for matchweek 2 of the Ghana Premier League, Hearts of Oak will host AshantiGold in their first game of the season at the Accra Sports Stadium.

Hearts had their game against Aduana postponed in match week one due to a Covid-19 scare.

Edward Odoom will be looking to begin the season on a positive note with a victory over the miners.