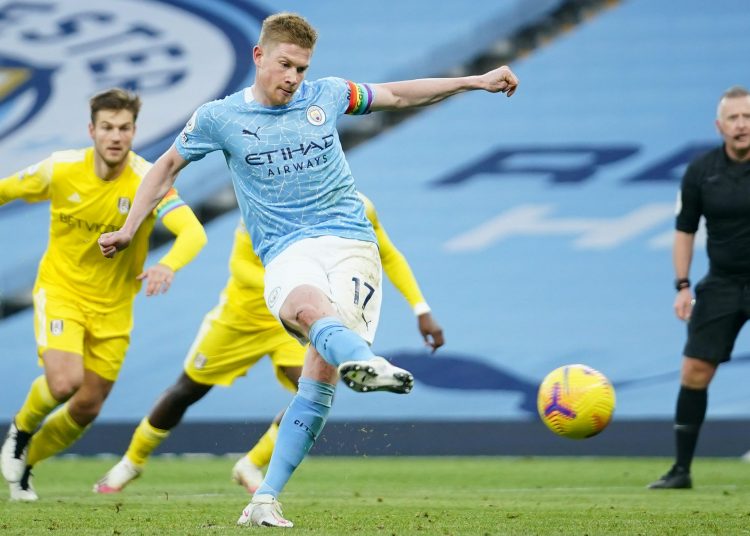 Kevin De Bruyne registered his sixth assist of the season and added a goal to boot as Manchester City breezed past Fulham to go fourth in the Premier League.

The Belgium international set up Raheem Sterling for his sixth goal of the season after just five minutes with an inch-perfect through ball for the England winger to tuck home.

Pep Guardiola’s side, who thrashed Burnley 5-0 last week, could easily have won by a bigger scoreline on a comfortable afternoon at the Etihad Stadium.

De Bruyne, particularly, was outstanding, not only setting up Sterling’s fifth-minute strike but scoring the second from the penalty spot and then hitting the bar, as well as forcing a good save from Alphonse Areola.

The hosts were rarely threatened and, having been 14th just over a week ago, their campaign is now starting to take shape with a leap into the upper reaches of the table.

Fulham saw little of the ball and consequently offered little in attack, but they were not overrun. After Monday’s stunning victory over Leicester, manager Scott Parker might still reflect on a good week.

Former City youth prospect Tosin Adarabioyo, who joined Fulham seeking first-team opportunities in October, acquitted himself well on his return to the Etihad but the hosts were always in control.

Guardiola made six changes from the side that faced Porto in midweek, with the return of De Bruyne being the most significant.

He was instrumental in the first goal, seizing possession and bursting forward to release Sterling in the area.

Sterling, who had already brought a save out of Areola moments earlier, picked his spot and calmly side-footed into the bottom corner.

Ademola Lookman had a shot blocked as Fulham tried to respond but that was a rare opening for the London side as City dominated possession.

João Cancelo turned inside and shot well over before Rodri missed the target and De Bruyne drew a good save from Areola.

Their second goal came from the penalty spot on 26 minutes after more good build-up play by City ended with Sterling being tripped in the area by Joachim Andersen as he tried to find room to shoot.

Fulham may have felt the contact on Sterling was only slight but the decision stood and De Bruyne clinically tucked away from the penalty, sending Areola the wrong way.

John Stones’ recent good form has been a huge positive for City but the centre-back had a moment to forget when he failed to notice Ederson was away from his goal as he hit a back pass. The Brazilian had no chance of retrieving the situation but, fortunately for Stones, the ball rolled wide.

Areola saved well again from a Sterling volley before the interval and De Bruyne spurned two glorious chances to add to City’s lead after the restart.

The first saw the Belgian thump a shot against the bar from 10 yards after being teed up by Gabriel Jesus, and he was then denied by Areola after being put through one on one with the keeper.

City began to ease towards the final whistle and Fulham briefly sparked as Ivan Cavaleiro tried his luck from distance but Ederson comfortably claimed.0The visitors pushed again in the latter stages but City saw out the game without alarm.

CAFCL: Asante Kotoko vs FC Nouadhibou called off due to COVID-19