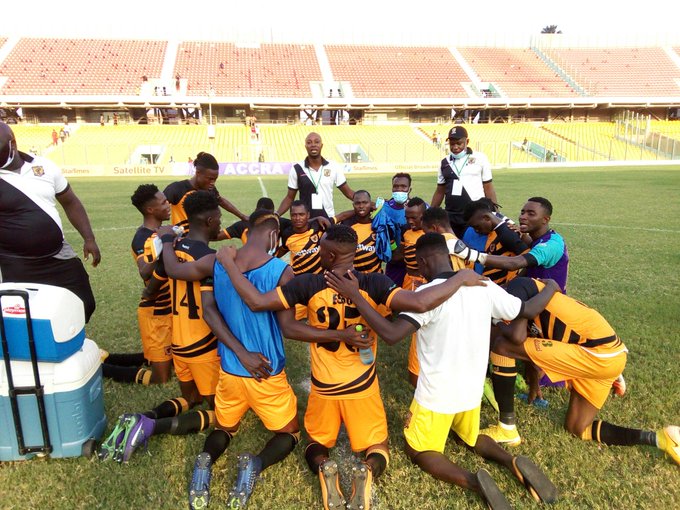 Ashantigold moved top of the Ghana Premier League with an impressive 2-1 win over Great Olympics in Accra.

With fans allowed to return to stadium for the first time since the coronavirus outbreak, the teeming Dade fans were sent into delirium when star man Gladson Awako fired them in front inside 14 minutes, with a fabulous turn an finish from outside the box.

Ashantigold found the equalizer through Amos Addai on the stroke of half time, before Yaw Annor scored the winner just two minutes into the second half to see of a famous away win.

In Dawu, Precious Boah’s double gave Dreams FC a first win in 6 games after he scored twice late in the game to give Dreams a 2-0 win over Ebusua Dwarfs and only their second win of the season.

Before the game, Dreams announced Serbian Vladislav Viric as their new head coach in an attempt to turn their dwindling fortunes around and he wasted no time getting them back on track.

Paul Atta Agyei’s 12th minute goal proved to be enough for Chelsea who secured a second win of the campaign.

In Techiman, Eleven Wonders asserted their dominance over Karela United with a thumping 3-1 victory.

Mohammed Tetteh Nortey shot Ignatius Osei Fosu’s men in front in the 25th minute but Diawisie Taylor levelled for Karela in the 75th minute with his 6th goal in just 8 games this season.

However, two late goals from Nana Kobina Osoh and George Amponsah sealed the win for Wonders, who remain unbeaten in 3 games against Karela in the Premier League.

Elmina Sharks vs Hearts of Oak ended 1-1 in Elmina