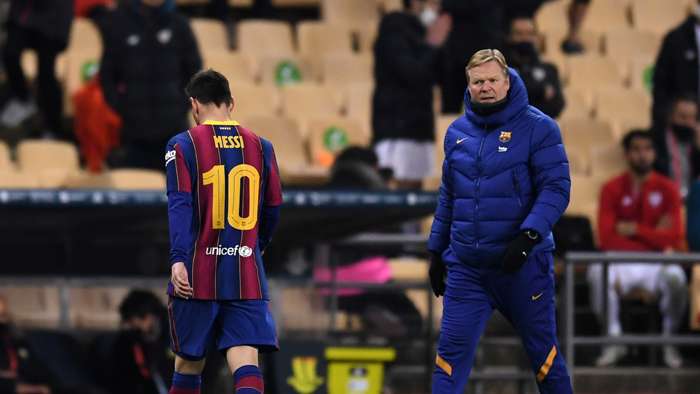 Lionel Messi was shown the first red card of his Barcelona career after he lashed out at the end of Sunday’s 3-2 defeat to Athletic Club in extra time.

Near the end of the Spanish Super Cup final, Messi played a pass and took a swing at Asier Villalibre as the Athletic forward ran across his path.

Here is the Messi red card from tonight.. 🟥🟥🟥

Referee Gil Manzano missed the incident at first but upon a VAR review, he showed Messi a straight red card for violent conduct.

t was the first red card Messi has ever received as a Barcelona player, coming in his 753rd appearance for the club.

The incident capped another frustrating episode in the Catalans’ season as they were unable to close out the silverware, having twice led.

Antoine Griezmann continued his recent revival by finding the net twice only for Oscar de Marcos and Villalibre to reply for the Basques. Indeed, their second equaliser came in the 90th minute of the game.

Messi could now face at least a four-game ban for his actions, depending on a review from the Spanish FA.

That means at minimum the Argentine could miss his side’s Copa del Rey tie against Cornella on Thursday, and La Liga matches against Elche, Athletic Club and Real Betis.

The Catalans are presently third in the Primera Division, though seven points back of leaders Atletico Madrid having played two games more.

Though Sunday saw Messi sent off for the first time with Barca, it was not the first red card of the attacker’s career.

He has been dismissed for Argentina on two occasions, including famously on his international debut, which lasted just a minute before he was sent off as a substitute.

His other red card came in the 2019 Copa America third-place play-off, when he was dismissed while serving as captain of his side. Despite his absence, Argentina won 2-1.