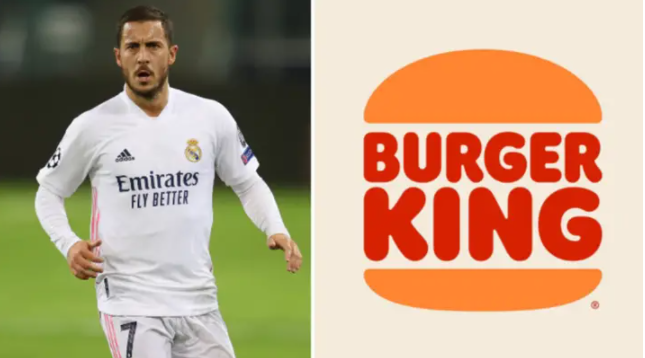 Eden Hazard has been subject to some brutal Twitter trolling from Burger King.

The Real Madrid winger was absent from training on Tuesday and that prompted Spanish football chat show El Chiringuito to tweet: “Hazard didn’t train with the team today. Why?”.

And fast food giant Burger King sent for the former Chelsea star by quote tweeting with the caption, “2×1 at Burger King” – clearly indicating as though the Belgian was taking advantage of their latest offer.

Whoever was on duty for the Burger King social media page appeared to be referring to reports claiming that Hazard returned to Real Madrid pre-season overweight on a couple of occasions.

He ended up being on the receiving end of a whole lot of jibes as a result, but did confirm he had piled on the pounds upon his arrival at the Santiago Bernabeu.

“It’s true, I can’t lie,” Hazard told Sport and Foot Magazine, as per MARCA, when asked if reports about him being overweight were true back in January 2020.

“But if I’m on vacation, I’m on vacation. I gained five kilos in the summer. I’m someone who puts on weight very quickly but I can lose it fast as well.

In April, Hazard did also reveal he was experiencing difficulty with his quarantine diet plan and that things were “complicated”.

But his struggles at Los Blancos do not end there. He’s been slated by the Madrid media after failing to produce for the 13-time European champions, scoring just four goals for the club since joining for big money.

And he’s been plagued by injury in the Spanish capital, missing a total of 38 games.

The latest is his ninth injury as a Real player, with the the former Lille man will now be out for around 4-6 weeks with a thigh injury, as confirmed by the club.
ShareTweetSend
Previous Post