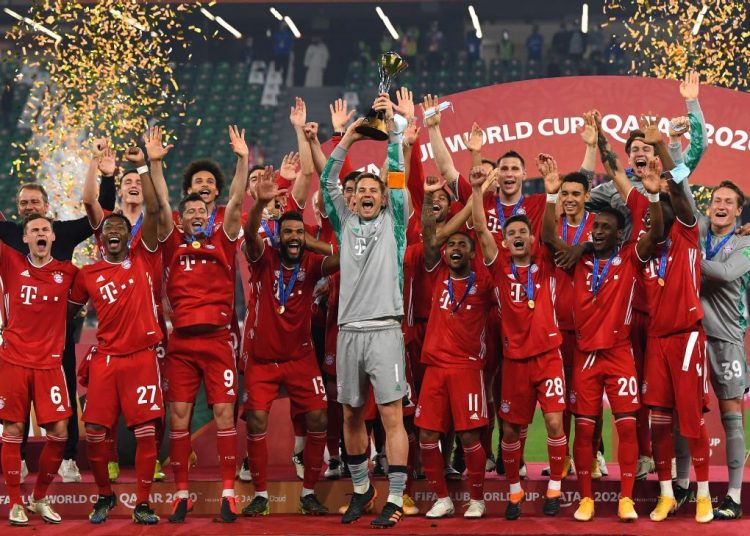 Bundesliga side Bayern Munich beat Liga MX’s Tigres 1-0 to win the FIFA Club World Cup in Qatar on Thursday and secure their sixth trophy in the last 12 months.

Bayern looked to have scored in the 18th minute through a powerful Joshua Kimmich strike from outside the area, but VAR ruled that Robert Lewandowski obstructed Tigres keeper Nahuel Guzman from an offside position and the goal was chalked off.

Guzman was under constant pressure throughout the first half and saved shots from Benjamin Pavard and Alphonso Davies, while seeing Leroy Sane clatter a shot off his post as the first half finished scoreless.

The Bavarians were missing several players, including Thomas Muller, Leon Goretzka and Javi Martinez to COVID-19 infections and Jerome Boateng, who returned to Germany for personal reasons.

Despite missing key players Bayern continued to pin back Tigres, the first North American club to reach the final, with their high-pressing game.

Tigres continued to frustrate the UEFA Champions League holders in the second half, but Bayern found their opener on the hour mark when Guzman tipped a save into the path of Pavard to finish into an empty net and give his team the lead.

Bayern kept the pressure on after going ahead and left Tigres, winners of the CONCACAF Champions League, to struggle as they looked to find a way back into the match.

The victory gave Bayern and Hansi Flick their sixth trophy in the last calendar year, including the Bundesliga, the German Super Cup and the DFB Pokal, among others.

“We have the six pack now,” Lewandowski said after the match. “This is a special story. We were desperate to win this title. Now we can savour this on the flight back.”

Bayern, who won their other Club World Cup in 2013, join the 2009 Barcelona team as the only two sides to hold all six major available trophies on offer at the same time.

Flick has a 58-5-5 record in 68 games since taking over as manager of Bayern, having won more titles over that duration than his team has lost matches.

After the match, Tigres coach Ricardo Ferretti said he was disappointed in the outcome, but thought his team played well against a difficult foe.

“I think the act of arriving to the final speaks to the good things we have done,” Ferretti said. “Today we played a great opponent, they were better and they deserve the trophy.

“I think we didn’t break down, it was good, we tried to attack against a well-defending team. I don’t leave happy, but satisfied for the effort.”