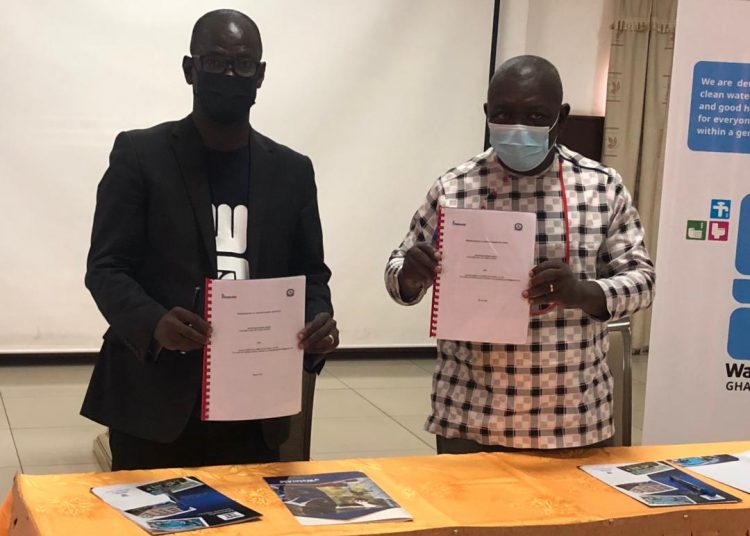 Ghana Premier League club, Accra Great Olympics, has signed a Memorandum of Understanding with WaterAid Ghana at the Mensvic Grand Hotel in Accra.

The partnership is expected to last for the next two years as WaterAid seeks to leverage on the publicity and exposure of the Wonder Club to achieve its aim as a community support to alleviate challenges associated with the COVID-19 pandemic.

According to WaterAid representatives, Accra Great Olympics caught the entity’s attention following the team’s superb run of form in the Ghana Premier League.

WaterAid believes in a world where everyone everywhere has access to safe water, toilets and hygiene education and it has been working with people in the world’s poorest communities to build taps and toilets, campaign for change and bolster the skills of local families in 26 countries in the past 34 years.

Addressing the media, board chairman of Accra Great Olympics, Amarkai Amarteifio, thanked WaterAid for partnering with the club and highlighted that the rich history and performance of the club in recent years has put them in the position to lead this campaign.

At a launch in Accra to sign the partnership, the Deputy Chief Executive Officer of Great Olympics, Mr Ato Coleman, described the partnership as the best especially when the majority of the club’s support base emanated from the coastal areas of Accra.

“The decision to bring these two entities together towards fighting this pandemic should be lauded because propagating the need to adhere to the COVID-19 protocols should be a priority especially in the coastal areas of Accra where our core supporters come from.

“We are ready to commence the education with community outreaches and together with WaterAid, I believe we are on course to help fight this pandemic in our communities.”

The Head of Policy, Advocacy and Campaign at WaterAid Ghana, Mr George Cobbina Yorke, said his outfit was committed to using football as a social mobilization tool towards educating the people within the coastal vicinity in Accra.

“We are glad to have Great Olympics on board in our push to get the education on COVID-19 adherence through to the coastal areas in Accra. The focus is to spread it across the other clubs going forward and we believe that could be achieved.”

Mr Yaw Attah Arhin, chairman of coalition of NGO’s in water and sanitation, applauded the decision of the two companies to come together to help bring behavioural change in areas where it was difficult to comply with the COVID-19 protocols.

On his part, the chairman of the Ghana League Clubs Association (GHALCA), Mr Kudjoe Fianoo, thanked Olympics for being the pacesetters in the trumpeting of the need to adhere to COVID-19 protocols especially in communities where they have their support base.

Mr Fianoo, who doubles as the Executive Director of Olympics, said WaterAid’s decision to partner Olympics through football was going to achieve great success especially when the sport was loved by all Ghanaians.

“This is an initiative worth celebrating and I look forward to seeing it spread across other clubs to help in the fight against this canker that has deprived us for a very long time.”