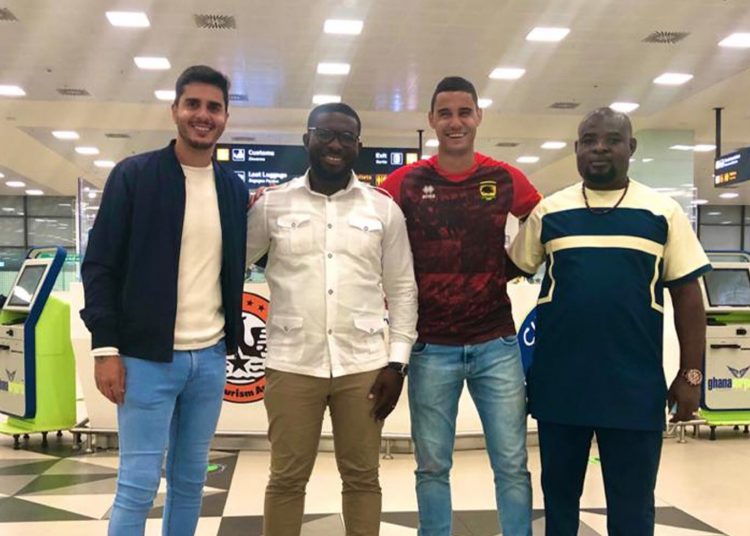 Striker Michael Vinicius Silva de Morais has finally arrived in Ghana after signing for local giants Asante Kotoko in the second transfer window of the 2020/21 season.

The 27-year-old is the second Brazilian signing by the Porcupine Warriors after Fabio Gama who has enjoyed a relatively good start to the campaign.

Michael touched down the Kotoka International Airport Friday night in the company of his representative and received by Kotoko CEO Nana Yaw Amponsah and Christopher Damenya, the club’s supporters’ Chairman.

Michael last played for Swedish Superettan side Vasalunds IF.

He started out in his homeland Brazil playing for several local clubs including Fluminense, Criciúma EC and América-MG.

Michael enjoyed his first European spell in 2015 signing for Portuguese side Estoril Praia for a half-season and reverted to Fluminense.

Four years later, he made a return to Europe, joining Swedish side Linköping City – in April 2019.

He lasted 8 months at Linköping City where he scored 10 goals in 15 matches (according to transfermarkt.com). After, the striker moved to Iwate Grulla Morioka in the Japanese thrid-tier division.

Michael then return to Sweden to sign for Vasalunds in August last year and is recorded to have featured once for the side – a 90 minutes exercise against Brage in the second round of the Swedish Cup on September 29, 2020. He did not score any of his side’s 5-goal win.

His stats by club from playing for the likes of América-MG, GD Estoril Praia, FC Linköping City, Fluminense Football Club, Vasalunds IF and Criciúma EC tally at 14 goals in 77 matches.

Michael’s arrival – in addition to that of striking duo Solomon Sarfo Talyor and Andy Kumi Francis – is expected to add more bit to the Kotoko attack. The club – currently placed fourth in the 2020/21 Ghana Premier League (GPL) standings with a game in hand – have scored just 13 goals in 16 matches.

Earlier in the morning, the club announced the arrival of Portuguese Mariano Barreto as the club’s new head coach. Both are expected to begin their stints when training resumes at the Adako Jachie Training Complex next Monday.