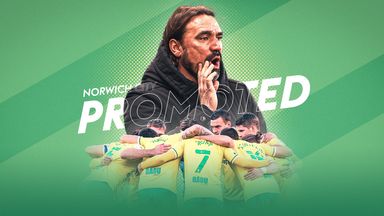 Norwich City have won promotion to the Premier League for a fifth time, after Brentford and Swansea’s failure to win ensured Daniel Farke’s side could not be caught in the automatic places.

The Canaries make an instant return to top flight following relegation to the Championship in the 2019-20 season.

Only Watford, eight points behind, can now deny them the second-tier title for a third time.

It is the earliest they have secured promotion since their first in 2004.

Saturday’s game against Bournemouth (20:00 BST) can edge them closer to securing the title with four games remaining after that.

The Canaries began the weekend needing a maximum of two points from their remaining five matches to secure promotion but the Bees’ goalless draw with Millwall and the Swans being held 2-2 by Wycombe meant they went up without having to kick a ball themselves.

Norwich lost 13 of their last 15 Premier League games last season as they returned to the Championship after just one season in the top flight.

But while most relegated sides struggle to turn around a losing mentality in the following campaign, the Canaries stayed calm and kept faith with head coach Daniel Farke and the nucleus of the squad which took them up the previous season.

They gained just four points from their opening four games but moved to the top of the table with victory at Middlesbrough in late November, 12 games in, and hardly looked back.

Norwich’s previous promotion was done in fine style, scoring 31 of their 93 league goals after the 75th minute, though a defence conceding 57 goals in the Championship would prove not to be fit for purpose at the highest level.