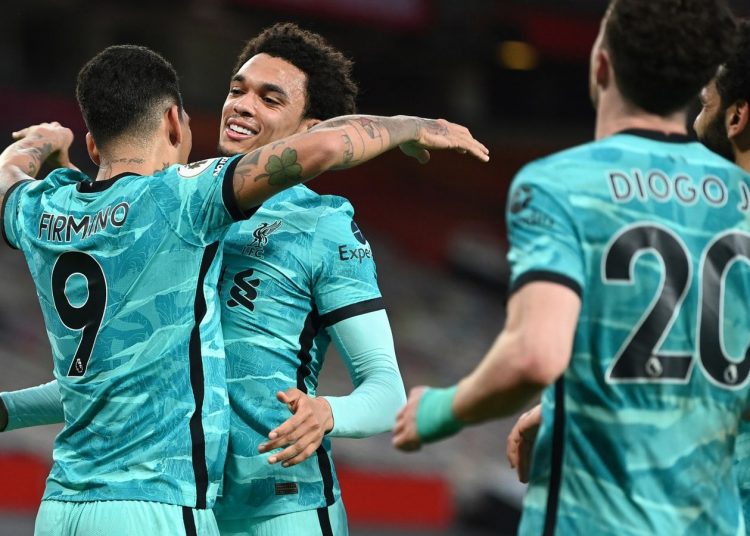 Liverpool breathed new life into their bid for a top-four finish in the Premier League after a 4-2 victory in their re-scheduled game at Manchester United.

The initial match on May 2 was called off as anti-Glazer protestors got into Old Trafford and onto the pitch, while Ole Gunnar Solskjaer’s team were stuck at the team hotel.

United fans were once again protesting outside the ground against the Glazer family ahead of kick-off, but there were no repeats of the scenes of earlier this month.

With both teams safely inside the ground, focus could turn to events on the pitch and United took an early lead when Bruno Fernandes’ shot was deflected into his own net by Nat Phillips.

However, Liverpool, who also had a penalty overturned after a pitchside review by referee Anthony Taylor, responded brilliantly as Diogo Jota’s flick (34) brought them level before Roberto Firmino’s header (45+3) completed the turnaround just before half-time.

Jurgen Klopp’s side extended their lead immediately after the restart as Firmino added his second of the night (47), taking advantage of what Gary Neville described as “erratic defending” from a United defence missing the injured Harry Maguire.

Liverpool had chances to finish the game off, but Jota’s shot hit the woodwork before United got back into the game as Marcus Rashford’s 50th goal at Old Trafford set up a grandstand finish.

Substitute Mason Greenwood saw a shot cleared off the line by Phillips as United searched for an equaliser, but Mohamed Salah’s late strike (90) secured the win that sees them move four points off fourth with a game in hand, piling the pressure on Chelsea and Leicester in the race to qualify for next season’s Champions League.