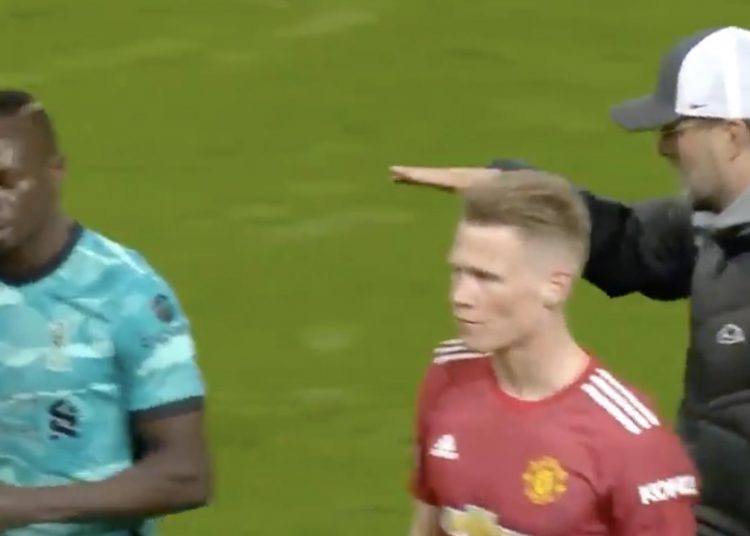 Liverpool fans are calling for the head of Sadio Mane after the forward was seen deliberately snubbing Jürgen Klopp at the end of their 4-2 win over arch-rivals Manchester United.

The Senegal international was a second-half substitute as the Reds picked up a huge win in their quest to qualify for next season’s Champions League, placing them fourth, four points behind Chelsea and six points behind Leicester City.

However, the win did not seem to matter to the 29-year-old who expressed his displeasure at being left out of the starting lineup after the game when Klopp went over to embrace him.

The German was seen shaking hands with a number of his players while beaming with delight but was left bemused when the forward ignored his approach, with the player walking off throwing away his tape while shaking his head as he left the Old Trafford pitch.

Liverpool’s fans have slammed the Senegalese forward for “disrespecting” Klopp at the final whistle:

Didn’t like it, Klopp said yesterday this happened so over 24hrs and he still did that in the public eye knowing full well his actions could take away what the team did.
I love Mane I really do but this wasn’t needed and was disrespectful.

pic.twitter.com/ttJRBTr7X4
Mané disrespected Klopp, and I really didn’t like that. Disappointed in Sadio.

That was some disrespect by Mané. Klopp should keep him on the bench till he apologizes.

Mane has been poor this season. Klopp was right to bench him and if he can’t get over it, sell him. He should get out of the club before he spoils things

Unreal disrespect. No matter how much pissed you are, you should never do that to a coach especially someone nice like klopp. Mane needs to be sold this summer https://t.co/AYq11hap9f

Mane being disrespectful to Klopp shouldn’t be tolerated…

He should warm the bench for a while… He is a big player now because Klopp gave him opportunity to express himself even when he was playing crap.

I love Mane and i’m sure he’s pissed off he got benched. But he has no right to disrespect Klopp especially when he doesn’t deserve to start

Mane needs to be properly reprimanded. No need for such disrespect. Klopp is always taking the blame in the public eye when this guy acts up. https://t.co/CHy6jHewAu

No player should disrespect the manager like that especially one like Klopp ! #Mane should be shown a door out for that. You are out of the team because you are playing piss poor. And Klopp’s given him enough chances. #MUNLIV #LFC

“Yes, I made a late decision in training, really late and changed Diogo for Sadio.

“And the players are used to that, I explain that, but I didn’t do that properly or whatever.

“And in that moment for a Premier League game, Sadio was obviously not too happy, that is all.

“The boys are used to me explaining but there was no time for that, that’s the situation. All fine.”