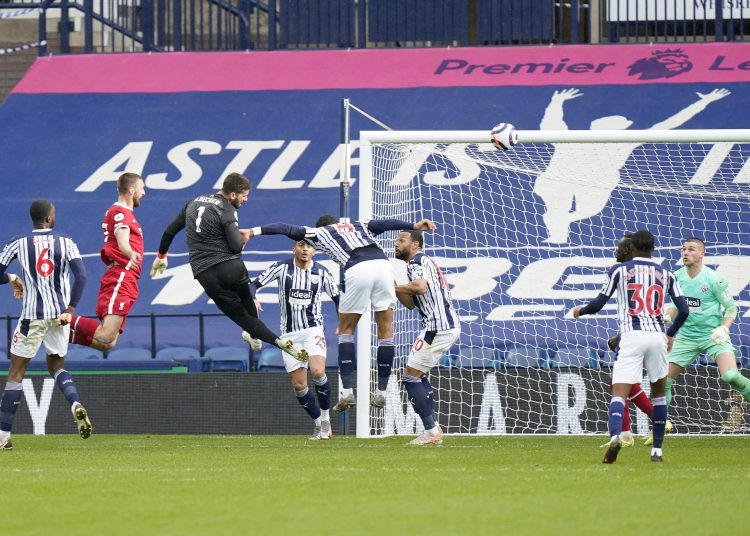 Liverpool goalkeeper, Alisson Becker produced a moment of magic and rarity, scoring very late as the Reds clinched an important 2-1 win over West Bromwich Albion at the Hawthorns.

It’s not often football fans get to see a Liverpool goalkeeper score a match-winning goal – but now we have thanks to Alisson Becker, the Brazilian goal stopper.

Alisson Becker’s headed effort from the last corner of the game was the first competitive goal from a Reds keeper ever in the club’s history.

Liverpool’s Champions League aspirations were on the line as they were being held by relegated Albion, when Alisson advanced for a corner deep in stoppage time.

A wicked delivery found the Brazilian goalkeeper unmarked 10 yards from goal. The Brazil international responded to Trent Alexander-Arnold’s cross with a header that found the back of the net to seal an important win for Liverpool.

What did Alisson say?

Speaking to Sky Sports after the game, he dedicated the goal to his late father, who died in tragic circumstances earlier this year.

Alisson said: “I’m too emotional, this last month for everything that has happened with me and my family, but football is my life, I played since I can remember with my father. I hope he was here to see it, I’m sure he is celebrating with God at his side.

“Sometimes you are fighting and things aren’t happening. I’m really happy to help them because we fight together and have a strong goal to achieve the Champions League, because we have won it once and everything starts with qualification. So I can’t be more happy than I am now.

“I just tried to run into a good place and be in a good place to try and help my players, to bring a defender, but no one followed me and I am lucky and blessed, sometimes things you can’t explain.

“You can’t explain a lot of things in my life, the only reason is God and he put his hand on my head today and I’m feeling very blessed.

“I have been away from interviews for a long time because I always get emotional on that subject but I want to thank all of the media, all the players and teams, I’ve had letters from Everton, Man City, Chelsea and more. If it wasn’t for you all I wouldn’t have got through it.”