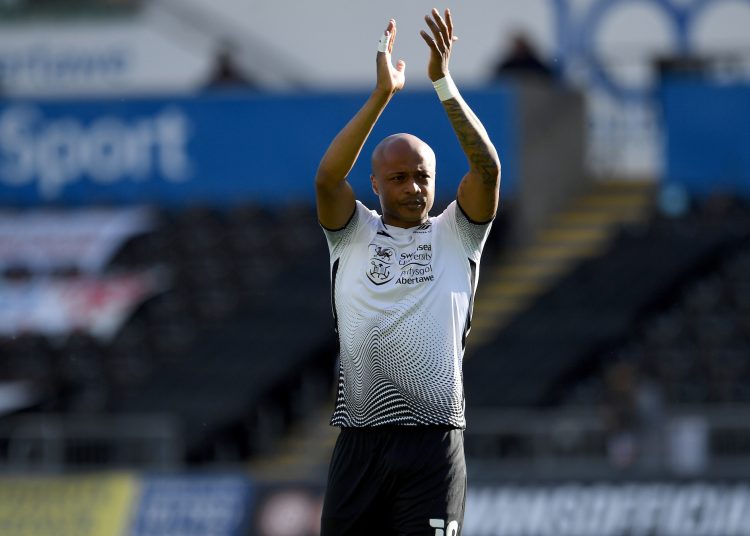 SWANSEA, WALES - MAY 22: André Ayew of Swansea City applauds the fans during the Sky Bet Championship Play-off Semi Final 2nd Leg match between Swansea City and Barnsley at the Liberty Stadium on May 22, 2021 in Swansea, Wales. (Photo by Athena Pictures/Getty Images)

Ghana captain, Andre Ayew, has spoken highly of his team mates at Swansea City and the bond they share as the try to make a comeback to the Premier League for next season’s campaign.

The Swans managed to beat Barnsley 2-1 on aggregate in their Championship playoff semi-final second leg at the Liberty Stadium in front of their home fans for the very first time.

Ayew’s goal in Swansea’s 1-0 win in the first leg proved crucial for the side as they drew 1-1 in the second thanks to goals from Swansea captain Matt Grimes and a Barnsley leveler from Cauley Woordrow.

After the match against Barnsley, Ayew gave very high praise to his team mates and the unifying spirit in the squad that has pushed them to the brink of making a return to the very top of the English footballing pyramid since their relegation in 2018.

“I have been in a lot of squads in my career and I have been around different players and coaches but this squad is very unique. The unity in here is not fake. It is real.

We understand each other. Sometimes, we argue just as it happens everywhere else but it is all for the better.

I am very proud of this team and what we have done. Now, we need to relax, prepare and enjoy this moment because in football, you do not a lot of opportunities to do very good things.

So, when you have these moments, you have to enjoy them but you have to quickly get back to work because we want to win on Saturday.”

The victory has given Swansea the chance to face Brentford in the Championship playoff final at Wembley on May 29 for a place in the 2021/2022 Premier League campaign.

Brentford beat Bournemouth 3-2 in the other playoff semi-final which was also played on Saturday at the Brenftord Community Stadium.