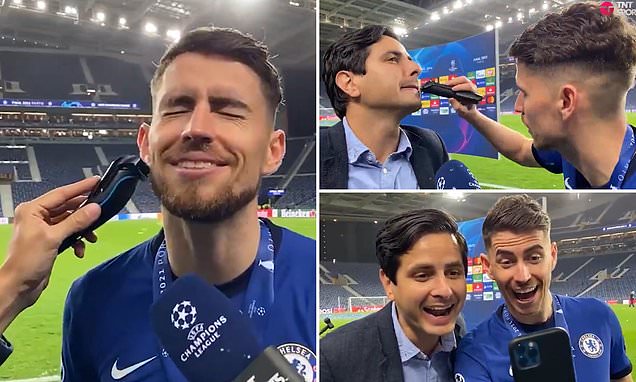 Chelsea added to their trophy cabinet yesterday as they secured their second Champions League trophy, when they beat Pep Guardiola’s Manchester City 1-0 at the Estádio do Dragão.

However, prior to the game, Chelsea midfielder, Jorginho had a rather interesting bet with a Brazilian journalist. The Chelsea midfielder said that his beard could be shaved off by ‘TNT Sports’ journalist Fred Caldeira if Chelsea won the Champions League.

True to his words, the 29-year-old got his beard shaved during the pitchside interview when Caldeira got a razor out and did justice to it.

However, the bet was two-way, as it was agreed that Fred Caldeira will also have his mustache shaved off if Chelsea indeed beat Manchester City. After the pair honoured their words, they took a picture together.

‘TNT Sports’ in Brazil posted the moment on their Twitter account and it has gone viral in a matter of hours.