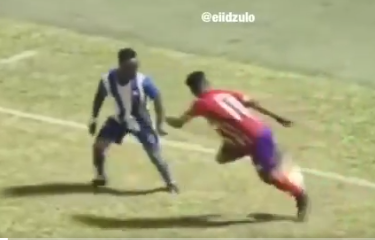 The derby between Accra Hearts of Oak and Great Olympics have been known to produce great spectacles each season.

More often than not, the spectacle is stolen by fans of both clubs, who would stop at nothing to ensure their team won the keenly contested battle of Accra.

On Sunday though, for the first time in a long time, while the teeming supporters an electric atmosphere inside the Accra Sports Stadium, it was on the pitch where an awful lot of the magic was produced.

But it was Daniel Afriyie Barnieh’s moment of improvisation that really stole the hearts of many.

Receiving the ball at the far corner, the Ghana U-20 captain was closely marked by two Great Olympics defenders and it seemed there was no way out for the 20 year old.

But he channeled his inner Ronaldinho, flicking the ball over the Olympics defender with the skill that has come to be known as “rainbow skill” or simply by “milo” in Ghanaian parlance.

See Video of the skill below: