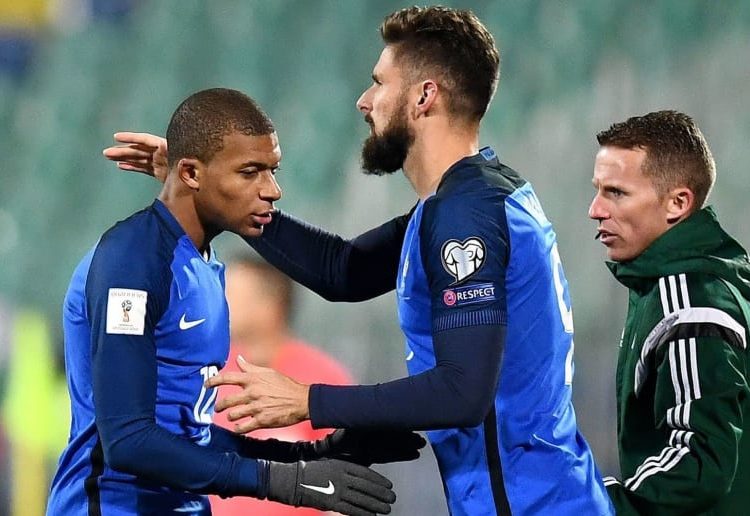 On Tuesday night, Chelsea striker, Olivier Giroud was the main man for France, scoring a brace in their win over Bulgaria.

However, the headlines were dominated by an apparent bust-up between Giroud and his national teammate Kylian Mbappe.

The lanky striker accused some of his teammates of not passing to him enough, seemingly attacking Mbappe in particular.

Reports by L’Équipe indicate that Mbappe was so incensed by Giroud’s comments that he wanted to make a statement in response at a press conference.

Some persons on social media posted videos indicating the apparent bad blood between the pair, including one which showed Mbappe turning and walking away after Giroud scored his first goal.

One hilarious video, in particular, might actually show the genesis of this beef between Giroud and Mbappe.

The clip has Giroud shaking the hands of his teammates in the dressing room after win at the 2018 World Cup.

Kylian Mbappé was angry on Tuesday night following Olivier Giroud's comments that certain individuals weren't passing to him frequently enough – he felt so attacked & so angry, that he wanted to appear in a press conference to make a statement, according to L'Équipe.

After reaching Mbappe, Giroud ruffled the hair of the youngster, which PSG forward clearly did not appreciate.

Mbappe can be seen brushing his hair later.

Giroud and Mbappe were both named, along with Karim Benzema and Antoine Griezmann, in France’s 26-man squad for this summer’s Euros.

Since that day… 😅 #Mbappe #Giroud pic.twitter.com/maeIZxzUOJ