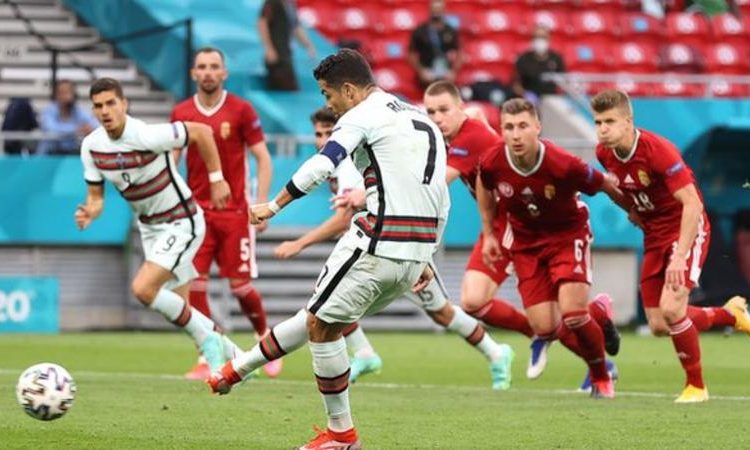 Cristiano Ronaldo became the top scorer in men’s European Championship history as Portugal beat Hungary in front of more than 60,000 fans in Budapest.

Ronaldo converted an 87th-minute penalty for his 10th goal in the competition, overtaking France’s Michel Platini on nine goals.

His 11th came only a few minutes later when he took the ball around goalkeeper Peter Gulacsi for Portugal’s third.

Hungary had looked on course for an unlikely draw until they conceded three times late on.

The deadlock was broken in the 84th minute when Raphael Guerreiro’s shot with the outside of the foot took a massive deflection off defender Willi Orban to break Hungary’s brave resistance.

The other Group F teams are World Cup holders France and former champions Germany and they meet in Munich in Tuesday’s late game (20:00 BST).

The result looked comprehensive, but Portugal had to work hard to defeat their opponents in front of the biggest attendance of the tournament so far.

The 67,000-capacity Puskas Arena in Budapest is the only venue at Euro 2020 that will have full crowds and the fans helped create a fantastic, much-missed passionate atmosphere.

But the home supporters were nearly silenced in the fourth minute when Liverpool forward Diogo Jota had a chance, but saw his shot pushed away by Gulacsi when a pass to a wide-open Ronaldo may have been the better option.

Portugal, whose starting 11 included six Premier League players, created the best chances in the first half but Jota was again denied, with Ronaldo glancing a header wide and firing over when he should have hit the target.

Hungary were mostly restricted to long-range shots straight at goalkeeper Rui Patricio. However, home substitute Szabolcs Schon thought he had scored when he squeezed a shot in at the near post, but the goal was correctly ruled out for offside.

Ronaldo then had the final say in injury time as he showed great skill to round Gulacasi for his second and Portugal’s third.

Hungary stay in Budapest and play France on Saturday (14:00), before Portugal face Germany in Munich (17:00 BST).