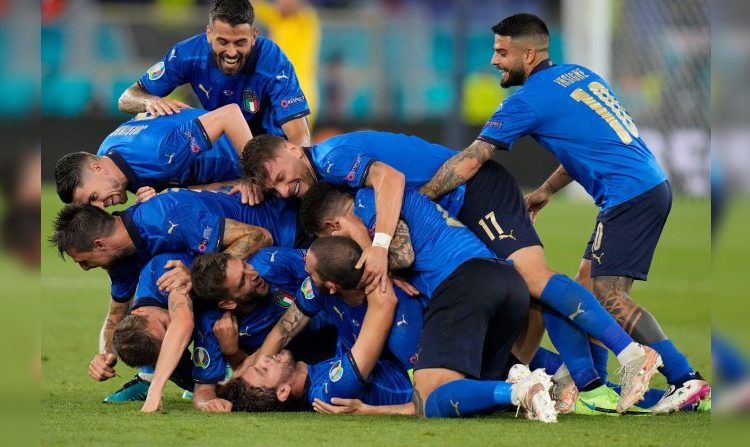 In-form Italy became the first team to reach the knockout stage of the European Championship with another impressive Group A showing in victory over Switzerland.

Roberto Mancini’s side thumped Turkey on the opening day of the tournament and made it back-to-back 3-0 wins courtesy of another sprightly performance in Rome.

Sassuolo midfielder Manuel Locatelli scored twice, first by finishing off a move he started by tapping in from Domenico Berardi’s darting run and cutback.

Italy’s passing and pressing was far superior to their opponents and Locatelli’s fizzing strike from the edge of the area underlined their control of the contest.

Switzerland barely threatened an Italian backline that has now gone 10 games without conceding in all competitions, a run approaching 1,000 minutes.

World champions France were tipped by many as pre-tournament favourites, but Italy have showcased their credentials as strong contenders with two eye-catching performances.

Once again they set the tempo before kick-off with a rousing rendition of the national anthem, sung with gusto by players and supporters alike at the Stadio Olimpico.

Switzerland struggled to cope as the Azzurri impressively extended their unbeaten run to 29 games, and their fierce defence and ruthless attacking play in the final third looks like it will take some stopping as this tournament progresses.

Before this championship, Italy had never netted three goals in a game at the Euros but Immobile’s effort means they have now achieved the feat twice in two games.

One blemish for the Italians came with an injury to captain Giorgio Chiellini, who had a close-range finish ruled out for handball shortly before he was forced off with a suspected hamstring problem.

Switzerland’s only chance of note fell to substitute Steven Zuber, but his low shot from the angle was comfortable for goalkeeper Gianluigi Donnarumma to deal with.

Italy can finish top of the group with a point against Wales on Sunday, which would set up a last-16 meeting against the runner-up in Group C at Wembley Stadium on 26 June.