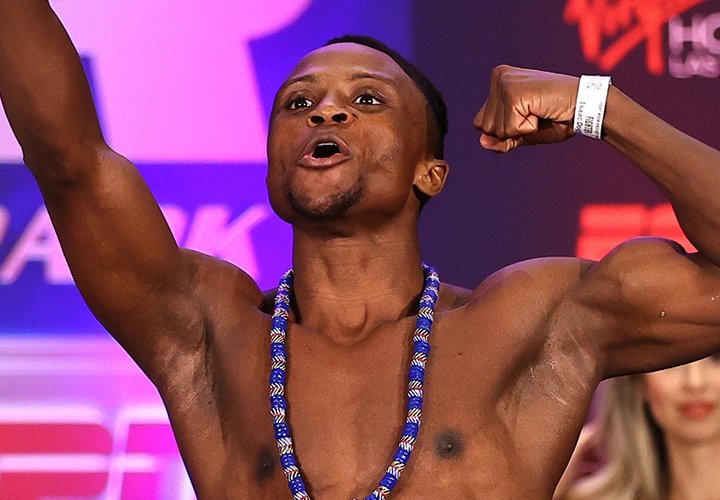 Isaac Dogboe struggled to fend off a surging Adam Lopez to pull off a gut-wrenching win.

The former WBO junior featherweight titlist managed to edge out the gutty Lopez to claim a ten-round majority decision win Saturday evening at The Theater at Virgin Hotels Las Vegas. Judge Dave Moretti had the action even at 95-95, overruled by judges Chris Migliore (97-93) and Don Trella (96-94) who ruled in favor of Dogboe in a spirited featherweight battle that landed on ESPN2 due to NCAA World Series coverage running long on ESPN.

Dogboe was fighting for just the second time since suffering the latter of back-to-back defeats to Emanuel Navarrete to end his title reign. The squat Ghana native has since moved up to featherweight, with Saturday’s bout marking his first under the guidance of head trainer Barry Hunter. Dogboe has taken to the teachings of the veteran cornerman, entering to an explosive start as Lopez struggled to contend with the former champ’s power punches.

The trend continued in round two, with Dogboe effectively working the body. Lopez looked to seize momentum, but was caught with a right hand and left hook downstairs before Dogboe came back up to land a left hook to the chin.

Lopez was able to take the lead in a spirited round three that saw several two-way exchanges. Dogboe was forced on the defensive for the first time, as Lopez landed in combination but was still forced to defend against Dogboe’s overhand right.

Dogboe punched in combination in round four, continuing to bully his way inside in neutralizing Lopez’s considerable height and reach advantages. Lopez tried to establish his jab but was disrupted by Dogboe’s right hand flying in from odd angles.

After catching an earful from Hall of Fame trainer and former two-division champion James ‘Buddy’ McGirt in between rounds, Lopez attempted to make key adjustments in round five. Dogboe was still bringing the heat, though forced to fight in reverse as Lopez controlled the action by doubling and tripling his jab. Both boxers spent portions of the frame fighting out of the southpaw stance, though neither one particularly effective.

Lopez pressed the action in round six, before Dogboe made key adjustments and stuck strictly to boxing in round seven. Lopez did his best to keep the action against the ropes, though Dogboe was able to utilize the ring and lure Lopez into fighting on his terms. A right uppercut snapped back the head of Lopez, his best punch of the fight to that point.

The favor was returned midway through round eight. Lopez allowed Dogboe to work his way inside, taking a slight step back and driving home an uppercut to momentarily stun the former champ. Dogboe took the shot well but spent most of the rest of the round leaning on and tying up Lopez, who connected with a long right hand in the closing seconds of the round.

The momentum shift did not sit well with Dogboe’s corner, with Hunter questioning how he allowed Lopez back into the fight. More questions would be asked in a near-disastrous round nine, where Lopez hurt Dogboe with a right uppercut in the corner. Dogboe stopped punching and did his best to play defense, only to catch a right hand and a left hook.

Dogboe and Lopez were instructed by their trainers to go out and convincingly take the tenth and final round. The advice was heeded by both boxers, who came out firing power shots. Dogboe waded through jabs and straight rights to respond with left hooks and wide right hands. Lopez adjusted and continued to punch down the middle as Dogboe suddenly stopped throwing punches heading into the final minute.

Lopez was feeling good about the finish, only to get caught with a left hook. The shot was Dogboe’s last shining moment, as Lopez let his hands go all the way to the final bell.  The late surge saw Lopez pull ahead in total punches thrown and landed, connecting on 152-of-527 total punches (29%) while Dogboe landed 134-of-487 punches (28%).

It just wasn’t enough for Lopez to sway the judges as he falls to 15-3 (6KOs). Lopez had won two straight heading into the night, including a 10-round decision over former title challenger Jason Sanchez this past February in Tulsa, Oklahoma.

Watch a thrilling last round of the fight here:

This final round between Dogboe and Lopez was very exciting to watch; for neutrals of course. Pretty much how most of this fight was. The two boxers went to war from round 1 and sold an absolute blockbuster. pic.twitter.com/DIhOHy2nMB

Dogboe picks up his second straight win, improving to 22-2 (15KOs). The 26-year-old Ghanaian returned to the win column last summer, knocking out Chris Avalos in the seventh round of their ESPN-televised affair last July.

Watch Highlights of the fight below: