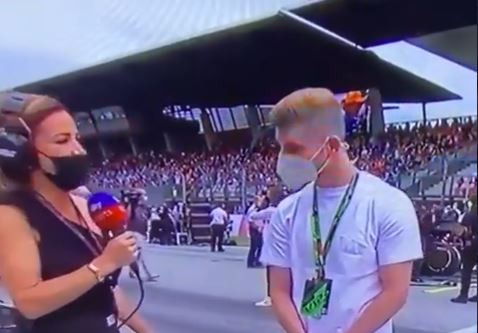 Timo Werner was guilty of a few bad misses last season but no one was expecting a positional change for the German marksman.

An awkward interaction between a Sky Sports reporter and Werner at the Austrian Grand Prix saw the journalist introduce him as Chelsea and Germany’s keeper.

It was a Formula One race after all and Natalie Pinkham’s gaffe could have been forgiven if fans hadn’t picked up on it and shared the video of the incident on social media.

In amongst the comments were some hilarious trolls suggesting the forward’s inconsistent form in front of goal last season played a part in the position change.

To his credit, Werner took the misrepresentation in his stride, replying politely to the reporter’s question.

Werner put that many balls out for goalkicks they think he’s a keeper pic.twitter.com/CM1GBrWqXa

He does have a lot of clean sheets tbf