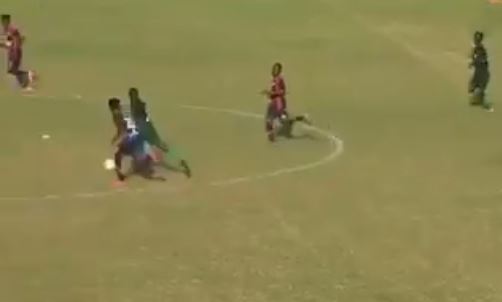 Elmina Sharks’ James Bissue has scored what could possibly be the best goal in the world.

The 30-year-old hit the ball from within the centre-circle with precision and placement to beat Legon Cities at the Nduom Sports Complex.

A potential Puskas winner from the Ghana Premier League 🚀🇬🇭

The goal was good for many reasons, one of which includes keeping survival hopes alive for the relegation-threatened team in the Ghana Premier League.

The goal by the number 7-shirted player for Elmina Sharks is perhaps even better than what Jonah Attuquaye scored for Legon Cities against Bechem United – replicating James Rodriquez’s golazo that won him the Puskás award in 2014.

Elmina Sharks will travel Obuasi Len Clay to face Kumasi Asante Kotoko on the final day of the Ghana Premier League and will be hoping to survive the drop.