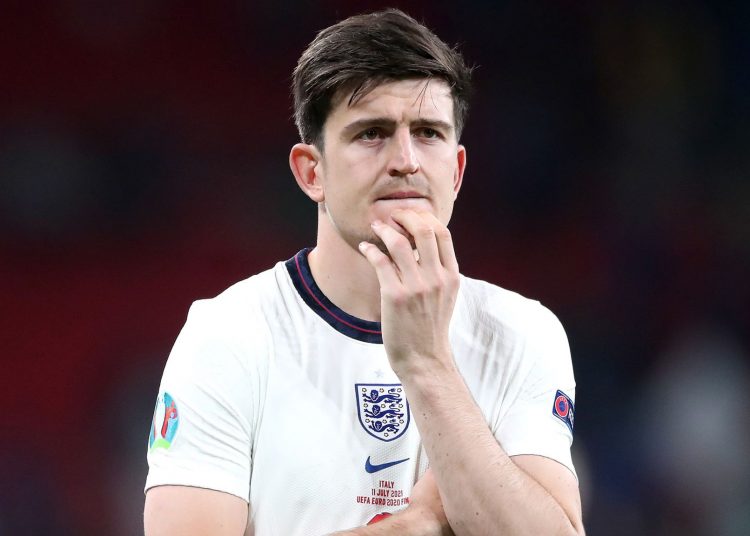 Fans fought with stewards and police as they attempted to break through gates for Sunday’s game at Wembley.

Maguire’s father, 56, was “struggling to breathe” after being trampled on.

“My dad was in the stampede,” Maguire told the Sun. “It was not a nice experience – it shook him up. He said he was scared.”

The Manchester United captain, who has two daughters, added: “I don’t want anyone to experience that at a football match.

“He was fortunate as every game he has been to he has had my nephew or one of my kids on his shoulders. I am pleased my kids didn’t go to the game.”

The 28-year-old’s father and agent Kenneth Shepherd were caught up in the incident as they made their way to the seating area reserved for players’ families.

Medical attention was not sought at the time, Maguire saying of his father: “He was struggling with his breathing afterwards because of his ribs, but he’s not one to make a big fuss.”

Maguire, who had about 20 members of his family and friends at the game, said he hoped the security breach would not affect England’s chances of hosting a future World Cup.

“The way some people acted was totally wrong,” he added.

“Dad will always support me and go to the games but he will be a little bit more aware of everything going on around.

“[Wembley] has been an amazing home, and the way [fans] have acted has been unbelievable, apart from the odd few in a final.

“We need to learn and we will — and it would be an amazing place to hold the World Cup.”