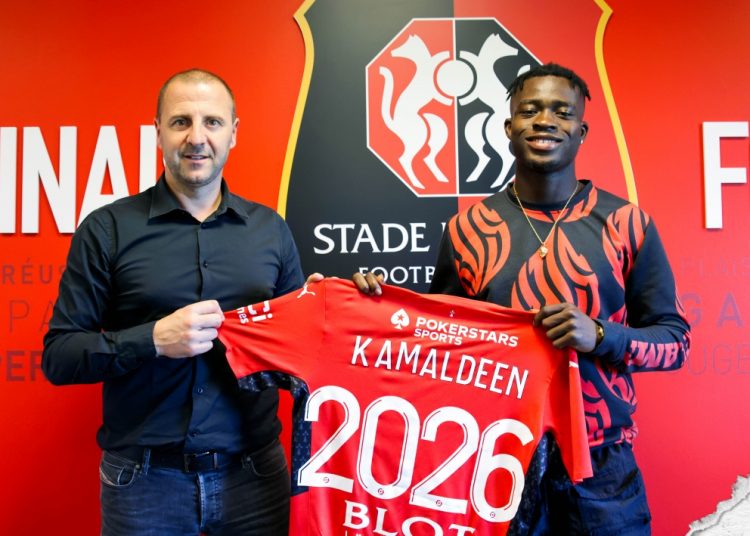 Ghanaian winger, Kamaldeen Sulemana, has pointed to Stade Rennes’ plan and vision for young players as the main reason why he signed to join them from Norwegian side FC Nordsjælland.

Kamaldeen’s move to the French Ligue 1 side was officially unveiled on Friday after passing his medicals and signing the dotted line.

Rennes managed to edge out Ajax who were equally interested in the former Right To Dream player’s services. The French club paid 15 million Euros or 13 million pounds and they have signed the Ghanaian to a 5-year deal.

Kamaldeen told Rennes’ official website that he was very convinced by the team’s project and vision in terms of grooming young players and that was why he decided to make the journey from FC Nordsjælland.

“I am very delighted to have joined Stade Rennes which is a very good French club. Their project appealed to me and the Ligue 1 Uber Eats is one of the best leagues in Europe.

Rennes has a good team which is full of talent. I know that the club has a reputation for its player development and for a young player like me, it is the best choice to make in terms of progression.

I came to help the team achieve its aims and it is a great challenge to take up.”

In terms of young player development, Kamaldeen will have the likes to fellow youngsters, Edouard Camavinga and Jeremy Doku, to see as examples of young players who are getting groomed and prepared for the next level of their careers.

What are Rennes getting in Kamaldeen?

The club’s technical director, Florian Maurice, revealed the attributes that made the club go for the Ghanaian winger ahead of the new French Ligue 1 Uber Eats season.

“We wanted to strengthen our attack and he is a player who can develop as a winger and also down the middle. He scores goals and he can give a final pass as well.

He has pace and drive and he can make the difference. We managed to get a player like him when in the beginning, it was not likely. We were competing with the likes of Ajax and his capture shows that we are capable of attracting players of his kind.

Now, he has to integrate into the French system. He already has an idea of how things work here and so, he can get used to things around here fairly quickly.”

Kamaldeen joins the legion of Asamoah Gyan, John Mensah and John Boye as Ghanaians who have played for Rennes at a point in their careers.