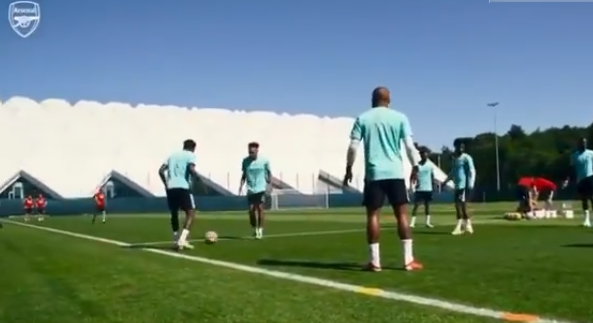 The first thing many people think about when Thomas Partey’s name is brought up is probably his combative play and his passing.

That’s the main reason Arsenal and their fans were so hyped by his signing last summer anyway and why prior to his move to North London, he was considered one of the best midfielders in Europe.

What many might be surprised to know is that Partey has a decent set of other skills too which, judging Arsenal’s preseason so far, he is desperate to showcase.

In a keep-ball session in training, Partey and Pierre-Emerick Aubameyang decided to have a little fun, initially just passing the ball to each other before the Ghanaian elevated the play.

The deft one-touch passes culminated in Partey attempting a slick move, which, despite breaking down the play, drew a loud “oooooh” from onlookers.

You can check out a video of the moment,  posted on Twitter by Jeffrey Owuraku Sarpong below: