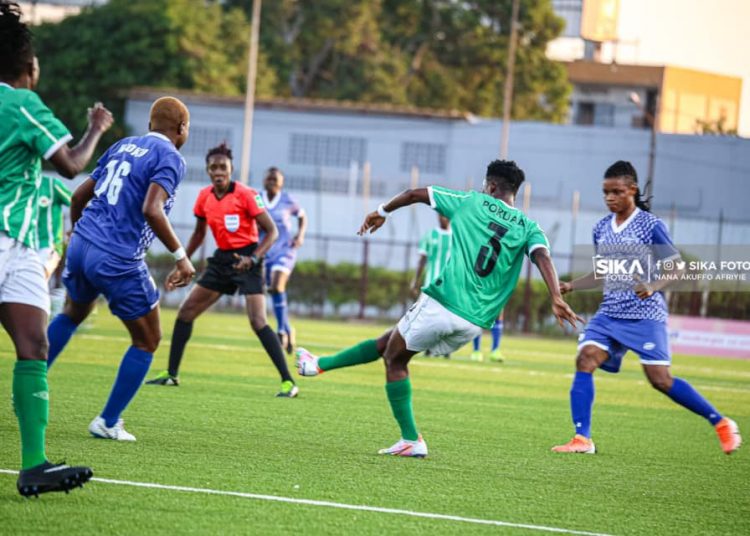 Nigeria’s Rivers Angels scored in either half to beat Ghanaian champions Hasaacas Ladies 2-0 at Stade Robert Champroux, Abidjan in the Wafu B qualifiers to the maiden Caf Women’s Champions League Saturday night.

Abiodun Deborah opened the scoring 17 minutes into the game before Evenagu Maryann added the second early in the second half to give the Nigerians the three points.

Hasaacas Ladies started the game on a bright note, creating the game’s first chance early in the 2nd minute.

Jafaru Rahma and Doris Boaduwaa combined well, but the latter couldn’t find the back of the net.

Rivers Angels proved the most potent in front of goal as Abiodun Deborah tapped in from close-range to give her side the lead in the 17th minute.

Hasaacas Ladies maintained their composure after conceding and dominated play in the first period but were feeble in front of goal as the half ended with the Nigerians in the lead.

Evenagu Maryann doubled Rivers Angels’ lead 7 minutes into the second half after rounding goalkeeper Grace Banwah to slot in, making it 2-0.

Milot Pokuaa graced the woodwork with a goal-bound effort in the 70th minute. Yusif Basigi’s side couldn’t fashion a way back into the game as it ended 2-0 in favour of Rivers Angels.

Rivers Angels FC will take on Niger’s AS Police de Niamey who drew a bye in the first round of Group B games on July 26 while Hasaacas will also draw a bye.

Hasaacas Ladies will clash with AS Police de Niamey in their last group game on July 29 and will be hoping to secure a win that will enhance their chances of a semifinal place.