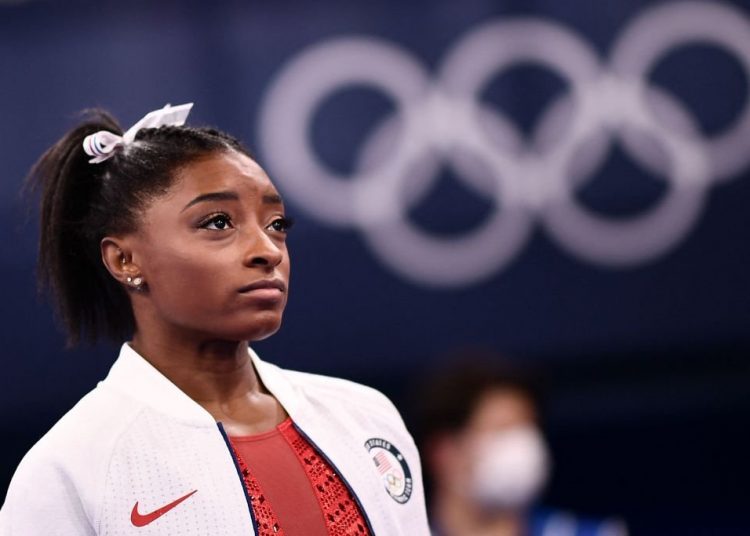 Simone Biles says she is not injured and withdrew from the gymnastics women’s team final at the Tokyo Olympics to “protect” her mental health.

Biles, 24, the most successful US gymnast of all time and winner of four gold medals and a bronze at the 2016 Games, huddled with a trainer after her opening vault, which scored 13.766, the lowest mark of the first rotation.

Biles then exited the competition floor with the team doctor, before returning several minutes later with her right leg wrapped. She took off her bar grips, hugged team-mates Grace McCallum, Sunisa Lee and Jordan Chiles before putting on a jacket and sweatpants.

Biles said she will “see what happens” in regard to her availability for the all-around final on Thursday night and the event finals later in the Games.

Asked after the event if she was injured, Biles said: “No. Just a little injury to my pride.

“After the performance I did, I just didn’t want to go on.

“I have to focus on my mental health.

“I just think mental health is more prevalent in sports right now… we have to protect our minds and our bodies and not just go out and do what the world wants us to do.

“I don’t trust myself as much anymore… maybe it’s getting older. There were a couple of days when everybody tweets you and you feel the weight of the world.

“We are not just athletes, we’re people at the end of the day and sometimes you just have to step back.

“I did not want to go out and do something stupid and get hurt.

“I feel like a lot of athletes speaking up has really helped.

“It’s so big, it’s the Olympic Games, at the end of the day we don’t want to be carried out of there on a stretcher.

Biles arrived in Tokyo as one of the biggest stars of the Games but struggled, at least by her high standards, during qualifying.

In a social media post on Monday, she said she felt like she had “the weight of the world” on her shoulders and she was finding it “hard” to deal with the pressure of the Olympics.

Before Biles addressed the media, USA Gymnastics released a statement saying she had withdrawn “due to a medical issue” and would be “assessed daily to determine medical clearance for future competitions.”

The 30-time Olympic and World Championship medallist required four podium finishes in Tokyo to become the most decorated gymnast in history, with the first of those now achieved despite her limited contribution.