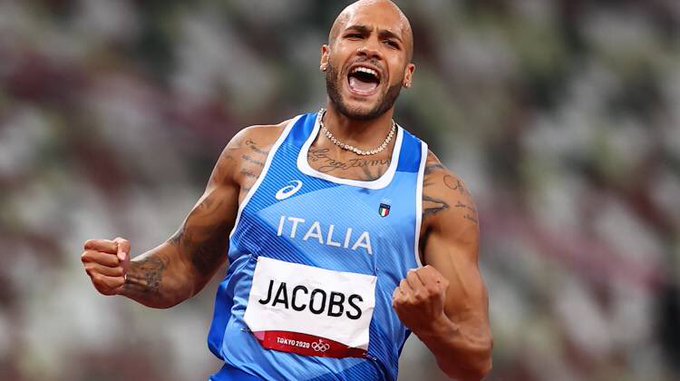 Jacobs, who only switched away from long jump in 2018, streaked clear to win in 9.80 seconds, 0.04 clear of American Fred Kerley.

World champion Christian Coleman and Trayvon Bromell, the world’s fastest in 2021, were both absent from the final.

Coleman, banned for whereabouts failures after missing three drugs tests, and Bromell, eliminated in the semi-finals, were joined on the sidelines by the long-retired defending champion Usain Bolt.

Few would have picked Jacobs, who was born in Texas to an American father but moved to his mother’s Italian homeland before his first birthday, as the Jamaican great’s successor.

But the European indoor 60m champion carried the momentum from his fast start all the way to the line to register a time faster than Bolt’s winning mark in Rio.

He was greeted by compatriot Gianmarco Tamberi, who had won a joint high-jump gold just minutes before and wrapped him in the Italian flag and an embrace.

Hughes will be left to wonder what might have been in a final stripped of its usual stars and big names.

His clear false start brought back memories of defending champion Linford Christie’s disqualification at Atlanta 1996 and denied him a shot of joining the most prestigious honour roll in athletics.

Hughes, who made the same mistake at last month’s British Championships, said it was the result of a sudden cramp in his calf.

The 100m final was almost overshadowed by an undercard of superb field events.

The 25-year-old already had victory wrapped up when she approached her final attempt, with no-one able to get close to her opening-round leap of 15.41m.

Despite a sub-par step phase, she still soared out to 15.67m to beat the previous 15.50m world record set two months before her birth by Inessa Kravets of Ukraine.

There was drama of a different kind in the men’s high jump.

Both had three failures as they attempted to match the Olympic record of 2.39m and, with error-free records on countback, they could have fought for sole possession of the title.

However, the friends decided to end the contest and split the title, sparking ecstatic celebrations from Tamberi who has competed with a plaster cast at the end of his run-up as a souvenir of an Achilles injury that ruled him out of Rio 2016 and almost ended his career.

Puerto Rico’s Jasmine Camacho-Quinn threw down the gauntlet to the rest of the field as she qualified in a new Olympic record of 12.26, just 0.06secs outside the world record of American rival Kendra Harrison, who also progressed.

Neither Daniel Rowden or Elliot Giles could make Wednesday’s 800m final, with Rowden missing out on a fastest loser spot by just five thousandths of a second after getting boxed in around the final bend.

“I’m very disappointed,” said Rowden. “I went for a gap coming into the home straight and the gap closed as soon as I went through it, I lost my stride and that was it.

London 2012 silver medallist Nijel Amos of Botswana, the fastest man in the world this year, was left on the track after a tangle with American Isaiah Jewett and will also miss out.

Jazmin Sawyers and Abigail Irozuru both made the long jump final during the morning session.