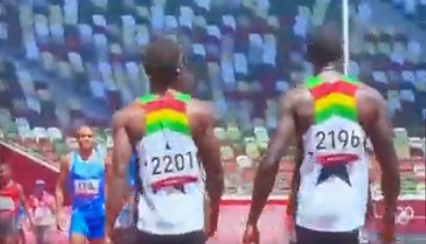 One of the members of Ghana’s Men’s 4x100m relay team, Joseph Paul Amoah, is already looking forward to the final on Friday after they secured their spot earlier today.

The team of Sean Safo-Antwi, Benjamin Azamati, Emmanuel Yeboah and Joseph Paul Amoah, finished 5th in their heat in a new national record time of 38.08s, ahead of one of the favourites, the USA.

Despite not making it through to the final in the automatic places, their time was still fast enough to see them qualify.

It was a nervy wait for Ghanaians who had stayed up to watch the race but there was immense relief once the team’s qualification was confirmed.

Tweeting after the race, Joseph Paul Amoah who reached the semis of the 200m earlier this week and run the anchor leg in the 4x100m race insisted that the team would be ready for the final.

“We work super hard for moments like this. Finals [are going to] be different,” he tweeted.

We work super hard for moments like this. Finals gona be different 🇬🇭❤️🙏🏿

The Ghanaians, who will be in Lane 2, will face off against Germany Canada, Jamaica, Great Britain, China, Italy and Japan.

The quartet will be hoping to win Ghana’s second medal at the Games, following boxer, Samuel Takyi’s bronze in the featherweight division.

How Ghana booked their place in the 4x100m relay final with a new National Record. Well done, everyone! Final is Friday at 13:50GMT. #Tokyo2020 pic.twitter.com/m8SiXVV8UT