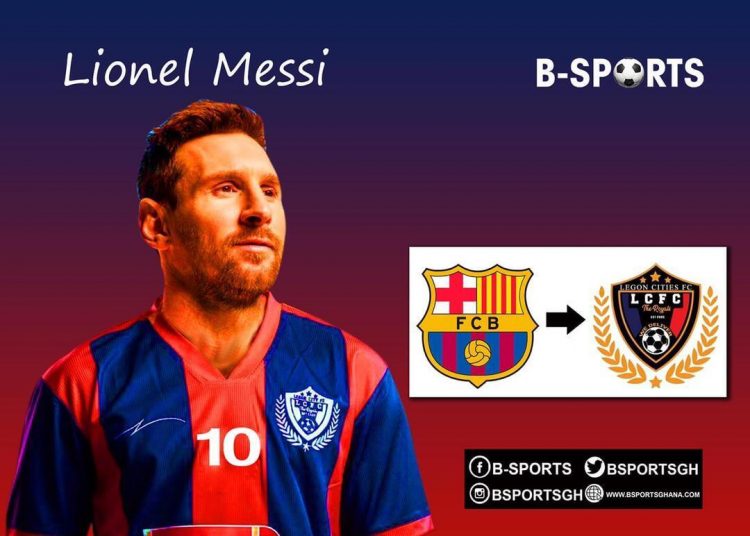 Barcelona’s revelation that captain Lionel Messi will leave the club this summer has re-ignited speculation about the Argentine’s next possible destination.

While Manchester City and Paris Saint-Germain are believed to be the clear favourites to sign Messi, given their huge financial advantage, one relatively smaller club isn’t perturbed.

Ghanaian side, Legon Cities might be eyeing the Argentine as longingly as every club not named Real Madrid are after last night’s shocking news.

In a very tongue-in-cheek tweet, Legon Cities’ Twitter page suggested, once the news about Messi leaving Barcelona broke, that they wouldn’t mind holding talks with the six-time Ballon d’Or winner.

“Negotiations with Messi and his entourage would not be bad at all…At all…Over to you management. Deliver now,” the tweet said.

Of course, their comments sent fans into stitches, with many of them joining in the fun in the replies.

Eiii Ghana hard dada we beg. Unless we sell Ghana

So that he battles relegation? Deebee team wei

Can’t wait to see messi playing along with Baby jet 🙂

Even Asamoah Gyan koraa u can’t pay him na Messi, do u want to sell Ghana to buy him?

The Gpl winner will get 50,000dollers Messi week salary is 500,000dollers @LegonCitiesFC how u go fi pay am#scorecard #CitiSports https://t.co/EulbeMBGg7

Barcelona said in their statement that despite agreeing a new deal with Messi which was set to be signed on Thursday, La Liga’s regulations on player registration had rendered a new deal impossible.

“As a result of this situation, Messi shall not be staying on at FC Barcelona. Both parties deeply regret that the wishes of the player and the club will ultimately not be fulfilled,” the club added.

Some have suggested that the statement was released to pressure La Liga into buckling under the pressure to keep arguably the league’s top assets.

Other reports say La Liga are playing hardball to get the Catalan club to accept their recent agreement with the CVC international investment fund.

Messi wanted to stay; we did everything to keep him but this is the end - Barcelona President