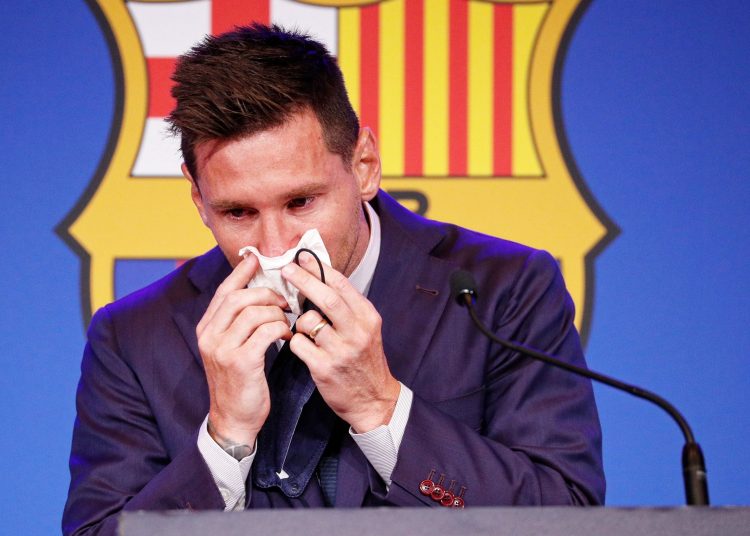 An emotional Lionel Messi says he did not want to leave Barcelona but that a move to Paris Saint-Germain is not confirmed.

Messi was in tears as he received a standing ovation in his final Barcelona press conference to announce the end of his 21 years with the club.

Messi had travelled to Barcelona expecting to agree on the details of the announcement of his new five-year deal, and he confirmed he offered to reduce his wages by 50 per cent.

“This year, my family and I were convinced we were going to stay at home, that’s what we all wanted more than anything,” said Messi.

“We’d always made this our own, we were at home. We thought we would be staying here in Barcelona. But today, we have to say goodbye to all of this.”

Barcelona president Joan Laporta blamed Messi’s exit on the former regime at the club in addition to La Liga spending rules thwarting any hopes of the Argentinian staying in Catalonia.

“I’ve heard things said about me, that I didn’t want to continue, but on my life, we did everything we could because I wanted to stay.

“Last year, I didn’t want to stay and I said it; this year, I wanted to stay and we couldn’t.”

He added: “I’m not ready for this. And honesty, with all the nonsense with the burofax, I was convinced of what I wanted to say.

“We thought we would be staying in Barcelona. The time we have had here has been amazing.”

PSG are offering Messi a two-year deal worth £25m a year after tax with the option of a further year and are confident the 34-year-old will sign.

Messi has spoken directly with PSG head coach Mauricio Pochettino and his lawyers are in Paris working on a deal.

But asked if a move to PSG will be his next move, Messi said: “That is one possibility, to reach those heights.

“I’ve got nothing confirmed with anybody. I had a lot of calls, a lot of interested clubs. At the moment, nothing is closed, but we are talking about a lot of things.”

Lionel Messi in tears as he bids farewell to Barcelona… 🔴🔵 pic.twitter.com/8NqhBmEeID