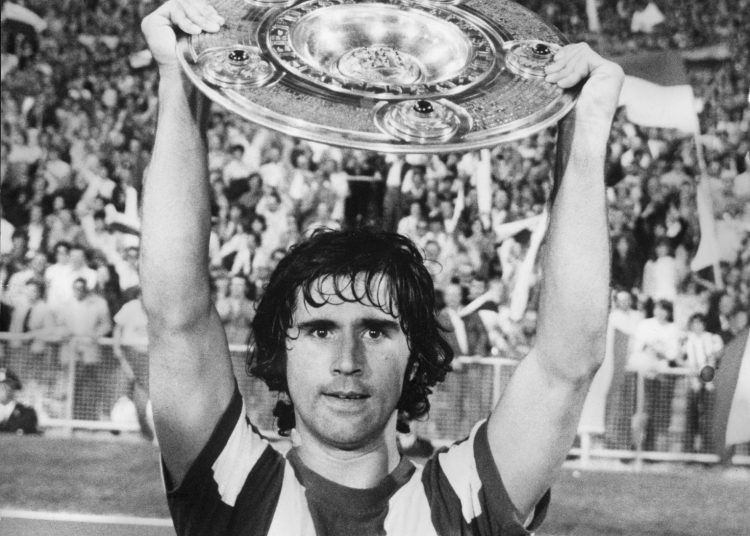 Bayern Munich has announced the sad news that Germany legend Gerd Muller has passed away, at the age of 75.

The former striker died on Sunday morning after a long illness, with the news described as a ‘dark day’ for the Bundesliga club.

Considered one of the finest players of his generation, ‘Der Bomber’ was a World Cup and European Championship winner with West Germany, lifted four league titles and won the European Cup three times in an iconic career with Bayern Munich.

Shortly before his 70th birthday in 2015, Bayern announced that Muller had been diagnosed with Alzheimer’s disease. He is survived by his wife Uschi and daughter Nicole.

“The German record champions and his entire fanbase mourn Gerd Muller, who died early Sunday morning at the age of 75.”

FC Bayern are mourning the passing of Gerd Müller.

The FC Bayern world is standing still today. The club and all its fans are mourning the death of Gerd Müller, who passed away on Sunday morning at the age of 75.

Muller scored 68 goals in 62 appearances for West Germany, including the winning goal in the 1974 World Cup final against Holland.

During a historic 15 years at Bayern, Muller netted a record 365 goals in 427 Bundesliga games and 66 goals in 74 European matches.

His record of 40 goals scored in a single Bundesliga season stood for 49 years and was only just broken by Robert Lewandowski last season as he netted 41 times to fire Bayern to a 31st league title.

Bayern president Herbert Hainer told the club website: “Today is a sad, black day for FC Bayern and all of its fans.

“Gerd Muller was the greatest striker there has ever been – and a fine person, a personality in world football. We are united in deep sorrow with his wife Uschi and his family.

“Without Gerd Muller, FC Bayern would not be the club we all love today. His name and the memory of him will live on forever.”

“The news of Gerd Muller’s death deeply saddens us all,” he said.

“As a player and a person, Gerd Müller stands for FC Bayern and its development into one of the biggest clubs in the world like no other.

“Gerd will forever be in our hearts.”