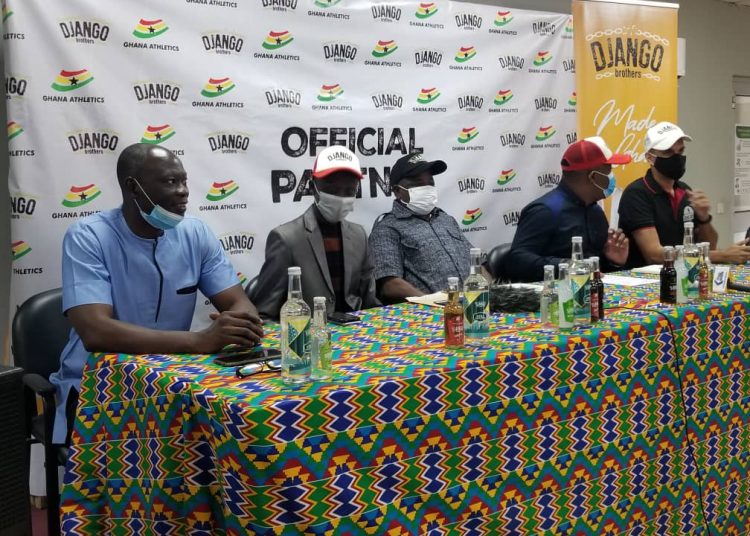 Share on FacebookShare on TwitterShare via Whatsapp
The Ghana Athletics Association (GAA) has signed a three-year partnership agreement with Tema Craft Brewery (TCB), the manufacturers of Django range of beverages.
The partnership will see the beverage manufacturing company provide financial support to the GAA including organizing an annual athletics championship.
Addressing the press during the signing of the partnership agreement, the president of the GAA, Afelibiek Ababu highlighted the benefits his outfit will receive from TCB.
“This partnership with the GAA is a clear demonstration of TCB’s commitment to Athletics in Ghana and its development. We are pleased to be key partners with the GAA on this journey”. Christopher Opara, Chief Marketing Officer at Tema Craft Brewery said.
“Today marks another history in Ghana athletics. Over the years we have been organizing competitions and we have been looking for a reputable company to partner us to be able to deliver and fortunately, we have been able to get Django after series of negotiations and now it is official. This is a partnership is going to last for three years and after the third year, we can extend it if both parties agree to the terms and conditions of the contract”. Afelibiek Ababu.
“Every year, Django will sponsor one athletics event which be called Django Brothers National Championships. Django will also support developmental activities of the GAA activities which will involve giving funds to help athlete prepare for international competitions”. He concluded.
Also speaking at the event, the president of the GAA, Bawa Fuseini says he is hopeful the partnership with Django will be sustained for a long time.
“We will ensure we put the resources from this partnership to effective use. We hope to go to another Olympic Games with this partnership as we look at a long-term partnership with Django”.
Christopher Opara, Chief Marketing Officer at Tema Craft Brewery said his brand share similar values with the GAA hence making it easy to strike a partnership.
“This has been in the pipeline even before the Olympic Games and we are glad to have that signed now and it is not because of the buzz the games created. There is a lot of passion points we share with the GAA. Things like excellence, self-belief. Especially in a sport like athletics, it is the fine margins that distinguishes the best of athletes. It is with this we believe we share a lot of things together. We are very excited and we believe no one can do the things we do as a beverage brand. We hope this will help us develop more talents in the country and bring us good tidings”.
Mr. Charles Osei Asibey, GAA’s 2nd Vice President who is also in charge of marketing and strategic communications noted that
“This partnership is a relief for development and competition as it guarantees one major national championship. TCB exclusive Athletics competition per year and a separate yearly grant to support GAA developmental activities at the regional level.”
Tema Craft Brewery is Ghana and West-Africa’s first microbrewery, well known for their flagship brand, Django; a bespoke non-alcoholic beverages and refreshing still & sparkling water as well as a premium range of craft beers.
ShareTweetSend
Previous Post