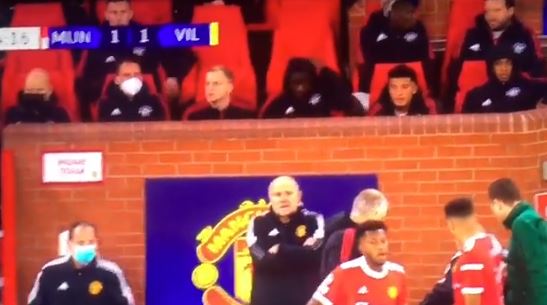 Man Utd were lucky to pick up all three points against Villareal in the Champions League on Wednesday night.

Having been a goal down, strikes from Alex Telles and a late goal Cristiano Ronaldo handed them their first win of the group stages.

That luck, however, doesn’t seem to have trickled down to one particular player on Ole Gunnar Solksjaer’s flip-flopping squad.

In fact, former Ajax mainstay, Donny van de Beek might be one of the unluckiest players in the world at the moment, or rather the most unfairly treated.

The Dutch midfielder was yet again on the bench from the start of United’s match against the Europa League winners and was not handed a chance to come on, with Ole allowed five subs in a UCL match.

The straw that broke the benched camel’s back was seeing the much-maligned Fred being brought on ahead of him.

Understandably, VDB was not particularly pleased and let his feelings known, including throwing the gum he was chewing away.

His teammates tried to calm him down but he wasn’t having any of it.

He has made only two starts this season, once in the Carabao Cup loss to West Ham a week after he was hauled off at half-time in the UCL loss at Young Boys.