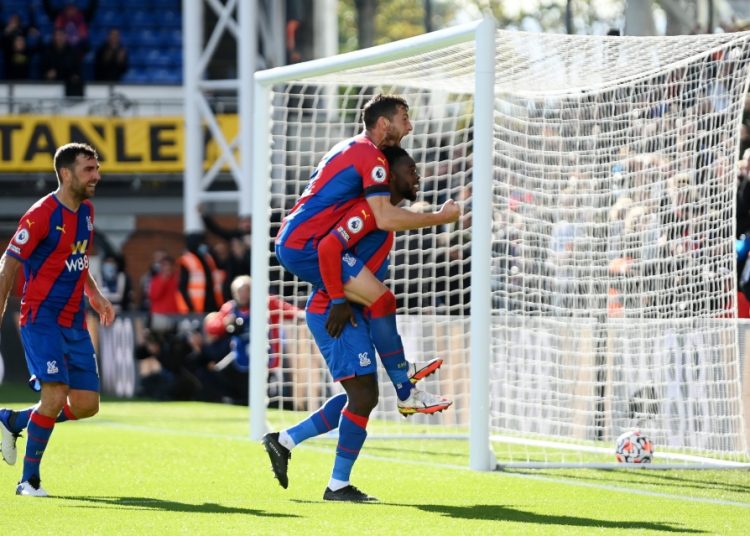 Leicester manager Brendan Rodgers is under increasing pressure after they forfeited a 2-0 lead to draw 2-2 with Crystal Palace.

The Northern Irishman was still reeling from fans booing in previous fixtures, and another collapse sees them with just two wins in nine across all competitions this season.

Patrick Vieira’s team took the game to Leicester in the first half, dominating proceedings but somehow found themselves 2-0 down at the break.

After half an hour of near constant possession from Palace, Kelechi Iheanacho turned the game on its head with a well-finished breakaway goal.

Palace looked to resume control of the game, but soon after it was 2-0 to the visitors when Joachim Andersen failed to cut out a Harvey Barnes pass, and Jamie Vardy finished clinically.

After a talking to from Vieira at half time, Palace’s second-half possession quickly looked like it had far more meaning to it, with Foxes goalkeeper Kasper Schmeichel far busier.

Six minutes after the break Odsonne Edouard hit the bar with a well-worked individual effort, and it was a big statement of intent from Palace.

The hosts’ breakthrough eventually came on the hour-mark when young Frenchman Michael Olise scored his first Premier League goal, volleying in an unstoppable strike after his initial effort was blocked.

Vieira upped the ante by bringing on Jeffrey Schlupp in the 71st minute, and was instantly rewarded when he buried the equaliser just 48 seconds later.

The result leaves Leicester now without a win in the leage since August as they slip off the pace in the race for the top six.

The draw continues the Foxes tough start to the season, both domestically and in Europe.

Leicester haven’t won a league game since August, and have had some worrying performances along the way, including a 4-1 drubbing by West Ham, and another collapse from 2-0 up against Napoli in the Europa League.

Rodgers was even booed by his own supporters for the first time when he substituted Ademola Lookman during a disappointing 2-2 draw against winless Burnley.

His biggest blow came in pre-season though, with centre back Wesley Fofana breaking his leg in a friendly against Villarreal after a massively impressive debut season at the King Power.

Leicester have now conceded 14 goals this season, the fourth most in the league, and Jamie Carragher believes that Rodgers needs to quickly get on top of the problem.

“Defensively they’ve been really poor this season,” Carragher said post-match on Sky Sports “They’ve just got to get that right otherwise they’re not going to end up where they want to be, which is fighting for the top four and getting back into Europe again.”

There are some reasons to be positive for Leicester fans though, with strikers Vardy and Iheanacho continuing to find the net with ease.

The pair have managed 33 league goals between them in the 32 games they’ve started together, with Vardy scoring 17 and Iheanacho 16.

The ageless Vardy is also closing in on another Premier League record, the most goals scored by a player whilst in their 30s.