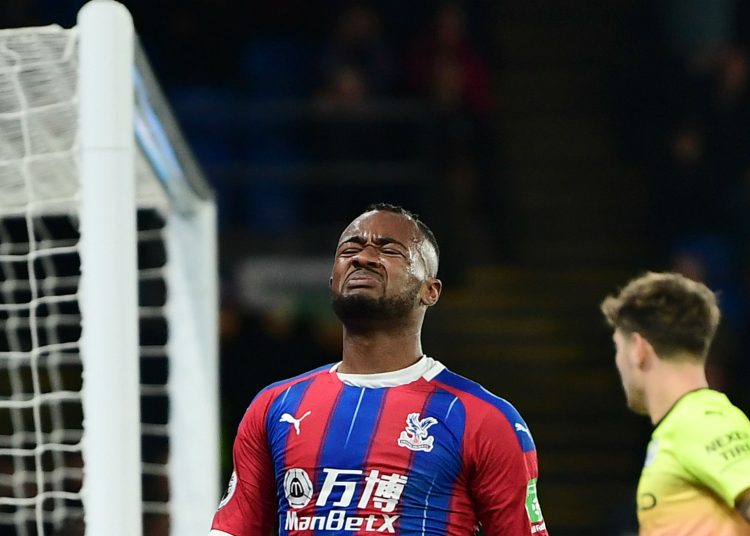 Fiifi Tackie, spokesperson of the Ayew family, asked Ghanaians to judge Jordan Ayew not on his goals but rather on his contributions to the team.

It is true that goals are a small and very unreliable metric to rate and measure the output of a player.

But it is also true that strikers need to score and even if he does everything else well, he should not play if he isn’t scoring.

Before we get into Jordan’s contributions in other areas, 1 goal and 2 assists in his last 43 games is atrocious for any attacking player.

While part of this can be attributed to the style of football of the team he plays in, there is much more to find when you dig deeper.

When Jordan scored his Premier League best of 9 goals in the 2019-20 season, he did so on 6.5 expected goals (xG). To put it simply, he scored more than he should have given the chances he was presented.

He followed it up last season with a solitary goal with an xG of 2.4. He underperformed his xG last season but if he had even matched it, a generous goal return would have been 3 goals.

This season is much of the same as he has an xG of 0.8 and is yet to score.

So, we can conclude two things: Jordan is not getting many chances and he is also not taking them. We can chalk this down to the system and forgive him on that front. 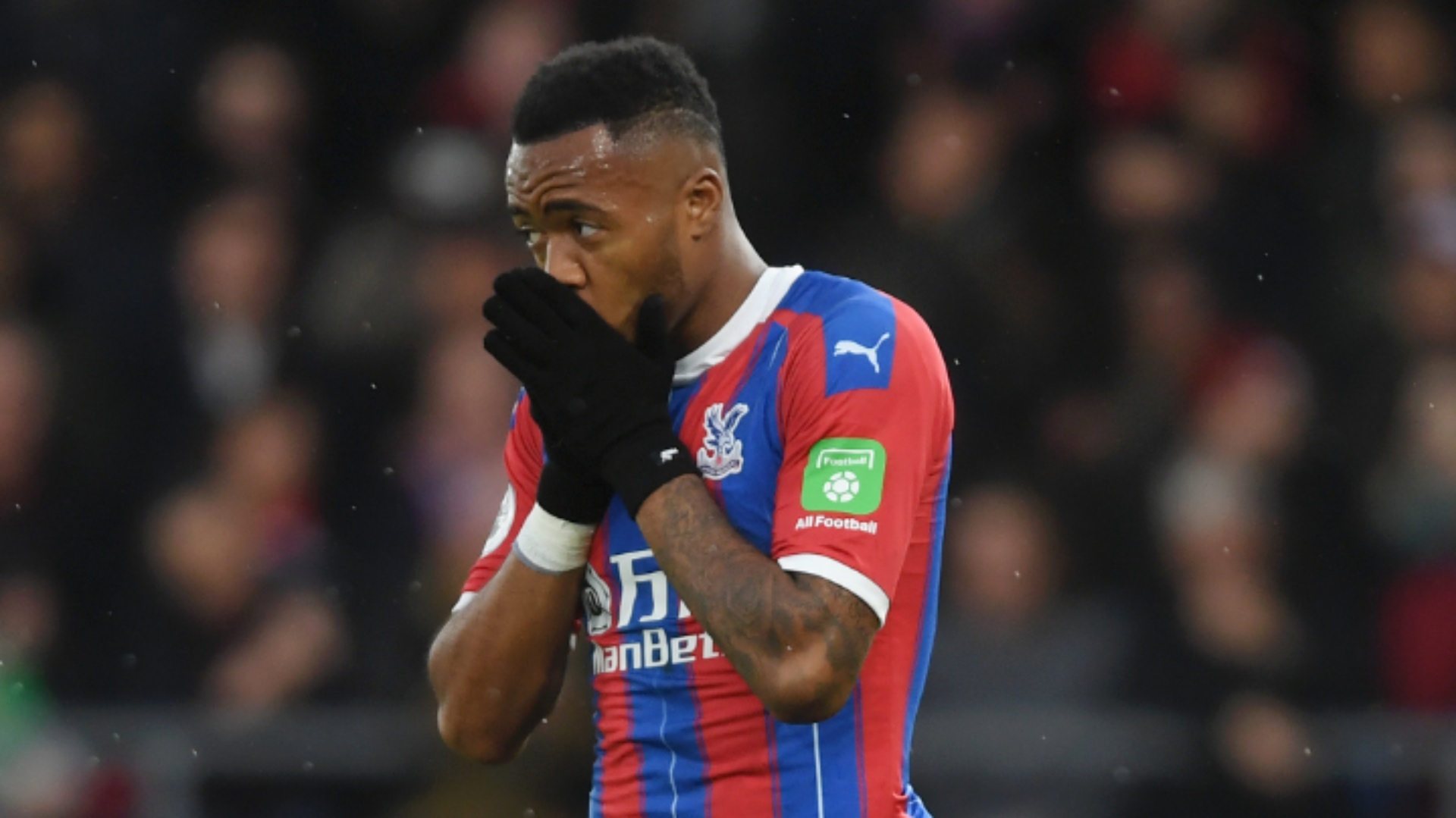 Now to the meat of the issue; if he is not scoring what is he doing? The answer may surprise you. Despite being accused of being lazy by many Ghanaian observers, per FBref statistics, Jordan Ayew is one of hardest working wingers in European football when it comes to defending.

In other words, Ayew is performing incredibly on the defensive side of his game but poorly on the attacking front. 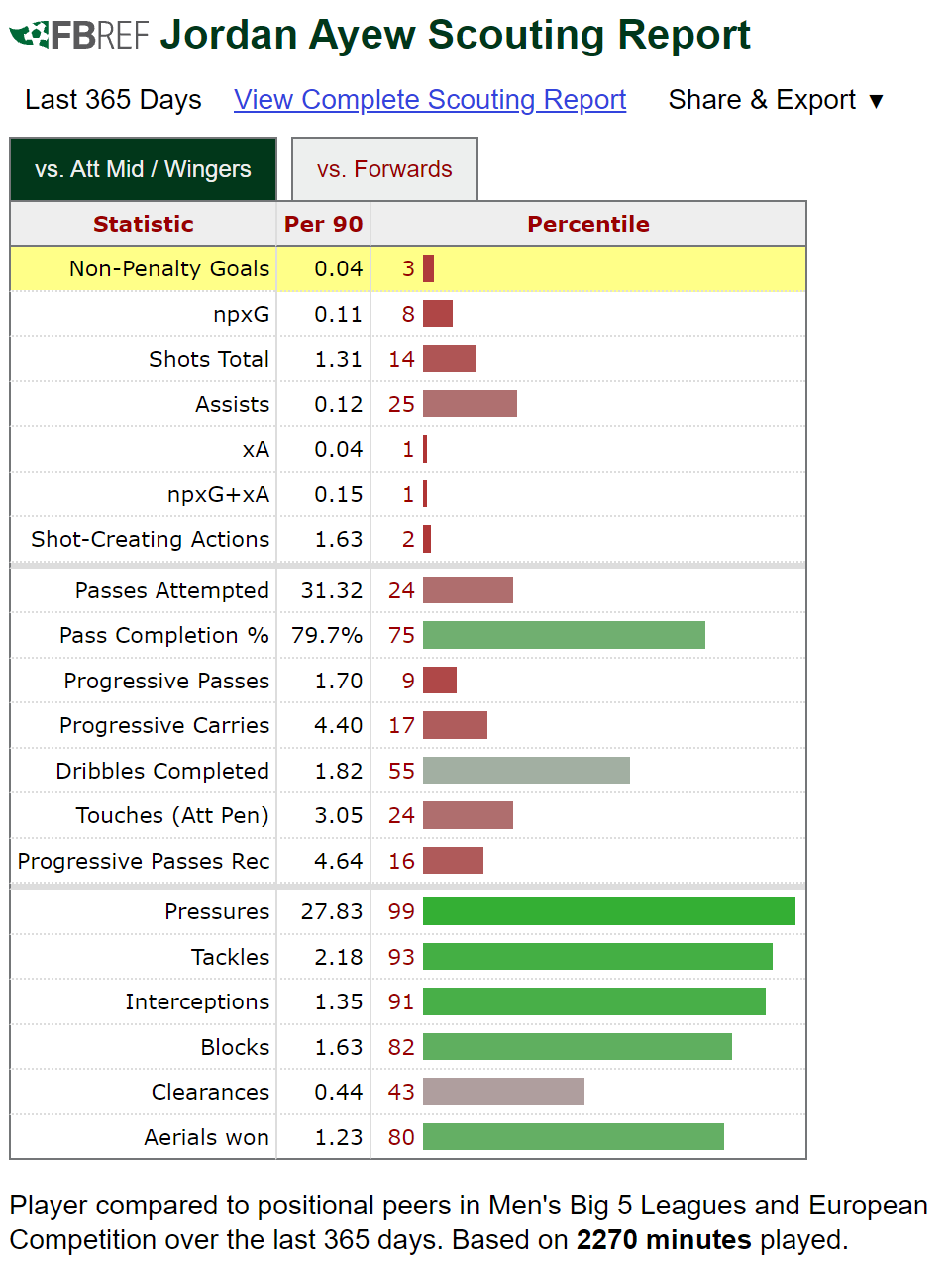 If you dive deeper and look at his numbers compared to his teammates, you see some interesting trends. Using last season, in 35 games he had the most successful pressures (159), ranked 6th for tackles and interceptions with 81, while being the 3rd best dribbler in terms of completions and attempts, only behind Wilfried Zaha and Eberchie Eze. 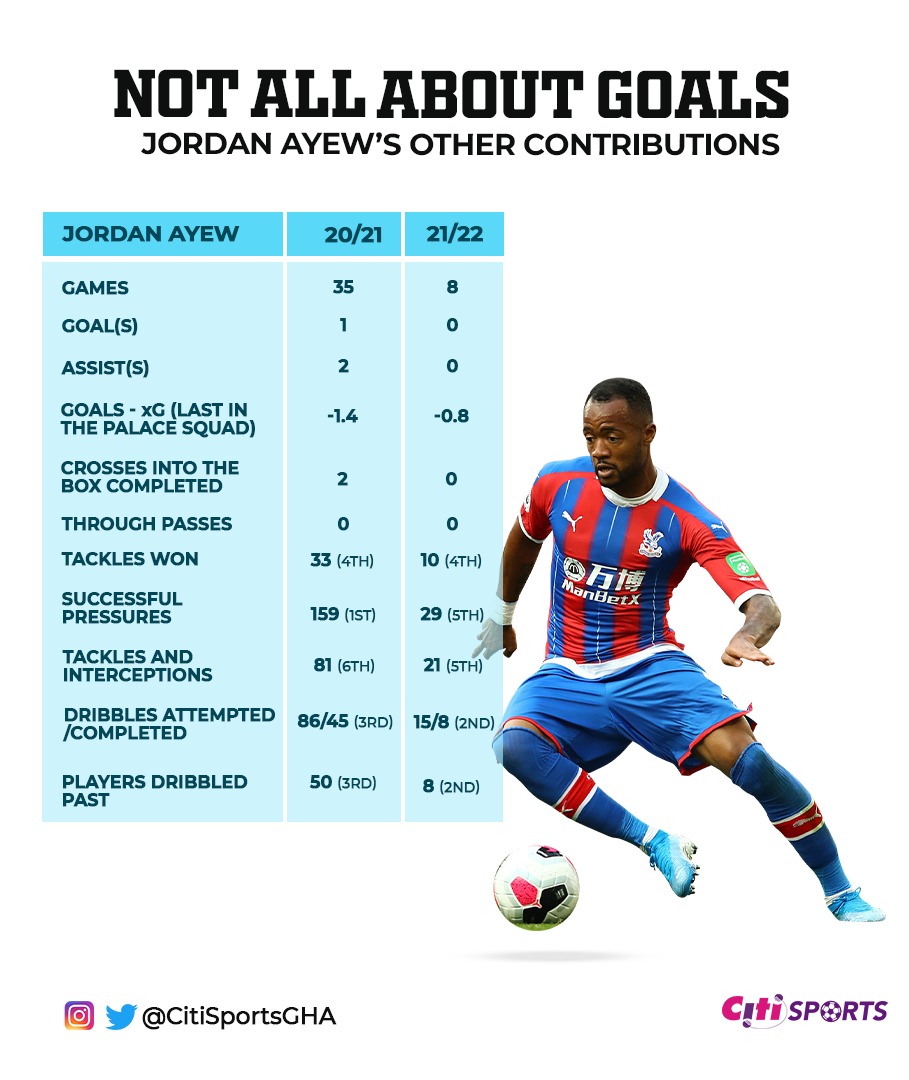 With this in mind, what is his place in this Black Stars team?

Playing him on the right is the best compromise; we get a wonderful presser who can use his skill to progress the ball and beat a man, and playing other players through the middle, possibly his brother Andre Ayew, who is a proven better goalscorer.

With Kamaldeen Sulemana on the left, that is a front three that can actually work magic for the national team.

In conclusion, Jordan Ayew’s profile still merits him a place in the squad as he has other attributes either than his goal scoring, that can help the team. Surely though, he is not the goal-scoring striker the team desperately needs.