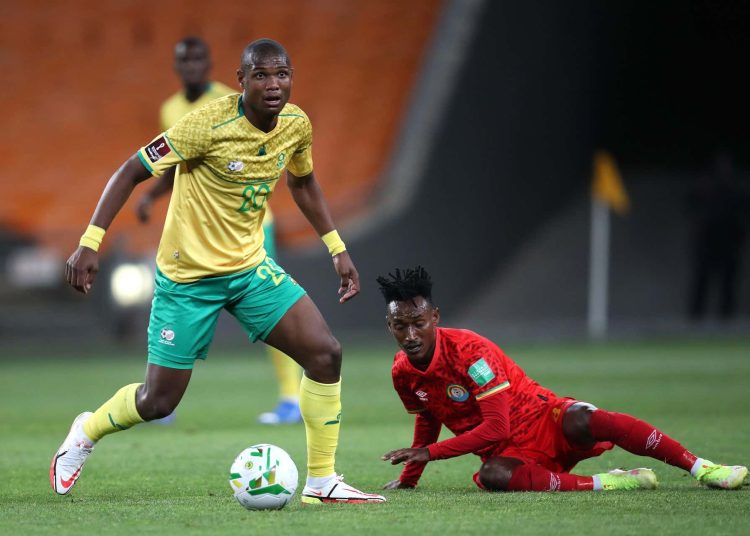 Coach Hugo Broos made four changes to the team which faced and defeated Ethiopia 3-1 in Bahir Dar on Saturday with Yusuf Maart, Njabulo Ngcobo, Victor Letsoalo and Evidence Makgopa being the new faces in the Bafana starting line-up.

Broos’ counterpart, Wubetu Abate kept his faith in Fasil Grebremichael despite the goalkeeper having scored an own-goal over the weekend, while Kebede leading the attack as he looked to find the back of the net again against Bafana.

South Africa got off to a good start with Broos’ charges pressing high up the pitch forcing Ethiopia to make mistakes and the early pressure paid off as the hosts took the lead just 11 minutes into the encounter as Kebede netted an unfortunate own-goal.

Letsoalo connected with Maart’s corner-kick and Kebede attempted to clear the ball away from danger, but his effort went into the back of his own net hand South Africa a 1-0 lead much to the delight to the delight of the 2000 fans inside the arena.

The Ethiopian responded by pressing the hosts, whose defence and midfield looked disjointed with the injured Mothobi Mvala missing having produced an outstanding performance in the middle of the park for the 1996 African champions in Ethiopia.

The visitors came to equalising when Mesud Mohamed’s long-range effort grazed the top of the crossbar and Kebede then saw his two attempts being saved by goalkeeper Ronwen Williams, who ensured that the first-half ended with South Africa leading 1-0.

The first real chance of the second-half fell for Makgopa after he was sent through on goal by Teboho Mokoena and he rounded Fasil Gebremichael, but his shot was bravely cleared off the goal line by Suleman Hamid and the Ethiopians survived a scare at the back.

However, South Africa were defending for large periods with the Walia ibex pushing for the equalizing goal and Broos decided to refresh his midfield as he pulled out Maart and Mokoena and introduced Ethan Brooks and Thabani Zuke.

Bafana were under siege in the closing proceedings and Abel Yalew had two chances to score, but he volleyed his first attempt wide of the target and his effort from a free-kick went narrowly wide of Williams’ left post and South Africa then held on to secure a 1-0 win on the night.

The victory saw South Africa climb to the top of the group standings – a point above second-placed Ghana with two matches left which will be played next month, while Ethiopia and Zimbabwe’s hopes of qualifying for the World Cup finals ended.