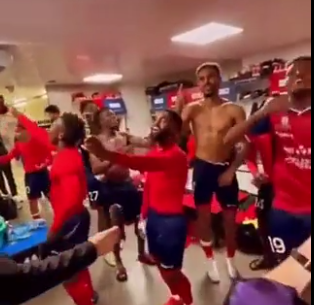 It is believe that the club’s 21-year-old midfielder Salis Abdul Samed, who hails from Ghana, is the one to have made the hit song popular among his teammates.

There was a kind of a knees-up in the dressing room as they danced to the hit song which is a massive endorsement for the Konongo-based musician.

This was after Vital N’Simba’s strike in the 32nd minute seal the points for the newly promoted side.

Samed played the entire duration of the match.

Black Sheriff performed at half-time during the final of the 2021 MTN FA Cup between AshantiGold and Hearts of Oak.