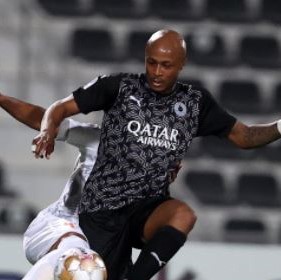 Ghana’s Andre Ayew scored his 6th goal for Al Sadd as the club defeated Umm-Salal in the Qatari Stars League on Tuesday.

Ayew’s goal was the 3rd for Xavi Hernandez’s side as they completed a comeback victory on the day.

They had fallen behind to a goal from Yaseem Al Bakhit in the 6th minute but Al Sadd rallied to score from Akram Afif, Santi Cazorla and Andre Ayew.

The victory sent to the top to the league table on 21 points; 3 ahead of Al Duhail ahead of the next round of fixtures that will see Ayew’s Al Sadd take on Al Ahli Doha on October 31.