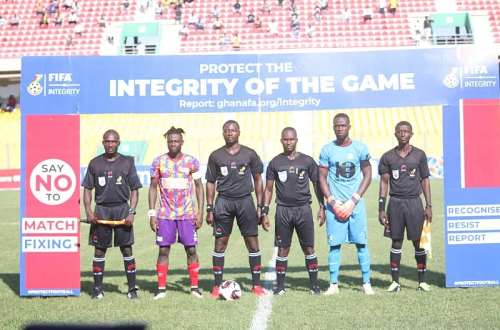 The Ghana Football Association has handed an 8-match day ban to referee Eso Doh Morrison for his sub-par handling of the match week 3 Ghana Premier League tie between Accra Hearts of Oak and Aduana Stars at the Accra Sports Stadium.

The match ended 1-1 on the day but weeks after the game, the Ghana FA decided to act based on their review of the said match after Hearts of Oak had filed a complaint over some of the calls made by the referee during the match.

Hearts felt that some of the decisions which included a red card to Mohammed Alhassan was unwarranted and they wanted a second look at the match.

The FA stated that that referee Morrison did not get some major decisions correct on the day and based on that, he was given a ban of 8 match weeks.

The decision was carried in a statement signed by Dr. Francis Eyiah Bediako, who is the Chairman of the Match Review Panel.

Here is the full ruling of the Ghana FA:

“Per the video watched, the 23rd minute complaint did not show any clear contact of the two players involved in the tackle.

In the 63rd minute, there was a clear contact in the tackle between player of Heart No. 9 and Aduana player No. 24, but the referee rather judged it as a fair tackle instead of a foul. The referee erred.

In the 78th minute incident, player No. 15 of Hearts of Oak and player number 10 of Aduana were involved in contesting for the ball in the penalty area of Hearts of Oak.

The referee awarded a penalty and a red card against the Hearts player number 15. This in our view was a wrong decision taken by the referee.”

In talking to the referee, he tried to defend every action and decision he took during the match even when all the actions were replayed to him in the video clips.

The referee (Eso Doh Morrison) is hereby suspended for eight (8) match days effective from the date of communication for the multiple errors committed during the match.