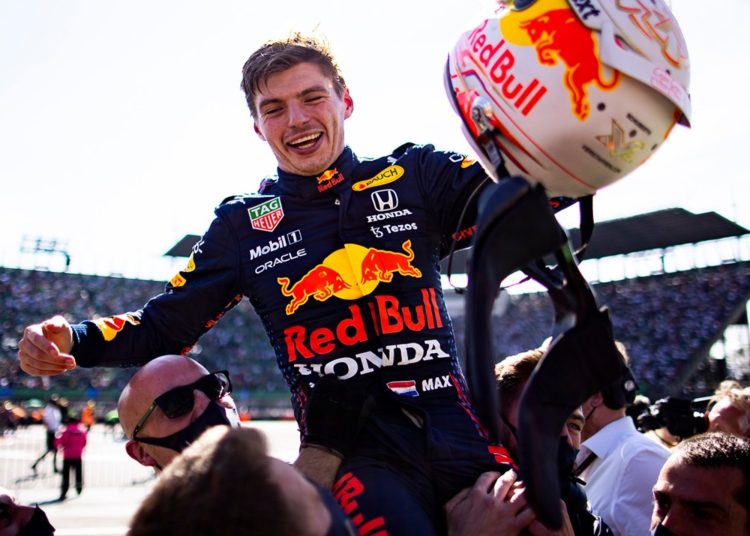 Max Verstappen has won the Formula 1 World Drivers’ Championship for the first time as he snatched the title from Lewis Hamilton on the final lap of the Abu Dhabi Grand Prix.

A dramatic late safety car allowed Verstappen to pit onto fresh tyres and overtake Hamilton on the very last lap, claiming the crown in the most incredible fashion.

Hamilton got off to the perfect start, beating pole-sitter Verstappen off the line.

The pair have gone head-to-head all season and even by the end of the first lap had almost collided once more.

Hamilton ran wide to remain in front of Verstappen pushed and briefly retook the lead he had worked so hard to take in Saturday qualifying.

Red Bull fumed as stewards decided the Mercedes man did not need to hand the place back after regaining it by running wide.

Christian Horner reacted by telling Sky: “We’re a little shocked at that because apparently, Lewis gave his advantage back which we failed to see, so we’re not best pleased.

“It’s a total lack of consistency, but we just have to focus on the race and do it the hard way.”

The FIA insisted that Verstappen ‘forced’ his position in front of Hamilton and so despite the Mercedes driver going off-track, deemed it to be resolved with Hamilton leading the race.

Things went from bad to worse for the Dutchman as Hamilton pumped in a number of the fastest laps with Verstappen complaining on team radio that he was struggling with his rear tyres.

The Dutchman pitted at the end of lap 13, putting on a set of hard tyres and forcing Hamilton to stop on the next lap – following Verstappen onto the same rubber.

Interestingly though, Red Bull teammate Sergio Perez opted not to do the same.

He instead remained out on track in the first position and held up Hamilton in a sensational battle.

This drastically reduced the gap between Hamilton and Verstappen, which was down to just two seconds after they both overtook Perez on lap 21.

Verstappen paid tribute to his teammate over the radio as he said: “Checo is an absolute legend.”

His hard work was not enough at this point though, as, over the next 15 laps, Hamilton looked to be in complete control.

He extended his lead to five seconds and continued to put in quicker lap times than Verstappen.

The dynamic all changed once more though as a virtual safety car allowed Verstappen a cheaper pit stop on lap 35, while Hamilton stayed out.

By the time racing resumed on lap 38, the Dutchman was 17 seconds behind the Brit, but now far quicker on fresh tyres and closing the gap.

“Are we going to be in trouble?” Hamilton asked his team, “Bit of a risk, leaving me out, no?”

By lap 41 a worried Hamilton said: “I won’t be able to keep this pace up for the whole way.”

It became clear that Verstappen would not catch Hamilton on pure pace and so was left hoping Hamilton would have tyre issues.

And with five laps to go, they got just that.

A crash from Nicholas Latifi saw a safety car enter the fray.

Verstappen pitted for fresh tyres and one last attempt to snatch the title, but it was unclear if there would be time for racing to get back underway.

Remarkably, with one lap to go, the race resumed and Verstappen surged past Hamilton to claim the crown.

Verstappen could not hide his emotion at his incredible victory, saying on the Red Bull’s team radio: “This is unbelievable guys. Can we do this for another 10 to 15 years together?”

He told Sky Sports: “It’s unbelievable. I kept fighting the whole race. I had the opportunity in the last lap. It’s astounding, I’m still having a cramp. It’s insane.

“These guys, my team, they deserve it. I love them so much. I’ve enjoyed working with them since 2016, but this year has been incredible.”