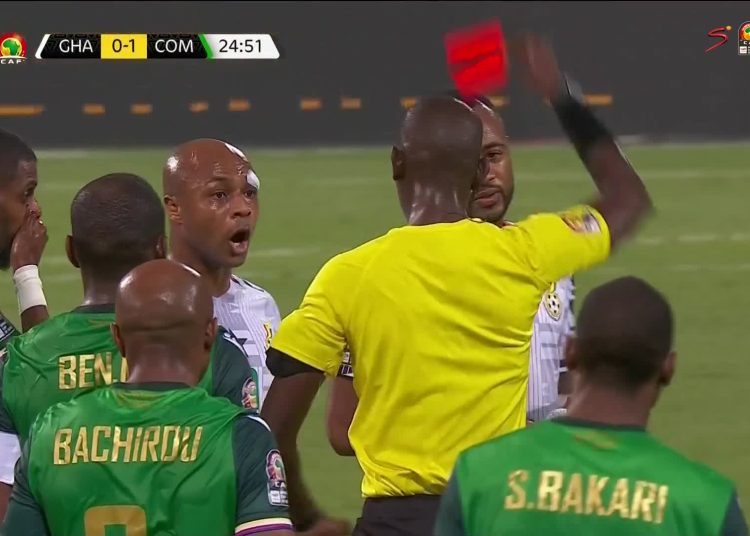 Former Black Stars captain Asamoah Gyan has leapt to the defence of current skipper, Andre Ayew after he was sent off against Comoros.

With the Black Stars surprisingly 1-0 down to the East Africans, Andre slid in for a rebound after Salim Ben Boina spilled a shot by Kamaldeen Sulemana.

Despite making contact with the ball first, Ayew’s momentum carried him into the goalkeeper’s arm.

While Bonia was being treated and eventually substituted, the referee was advised to review the incident on the Video Monitor.

After watching a few frames of the footage, the official decided to send off the Ghanaian captain.

On social media, most Ghanaians felt the decision was extremely harsh, insisting that the ball was there to be won after the keeper spilled it.

It was a sentiment shared by Asamoah Gyan when he offered his thoughts on the incident at halftime on SuperSport.

Gyan described the referee’s call as harsh, stating that his former national teammate only had eyes for the ball when he slid in.

“It was a harsh decision by the referee,” Gyan lamented.

“He was sliding in, he was trying to score. He got the ball first but unfortunately, he collided with the goalkeeper’s hand.”

The Black Stars need to win to stand a chance of qualifying for the next round of the competition but are down 1-0 at the break.