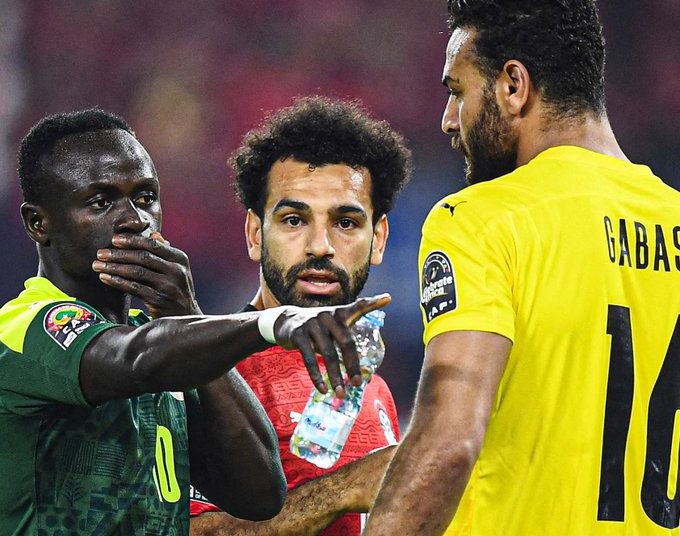 Egypt goalkeeper, Abou Gabal “Gabaski” has made a name for himself at the 2021 Africa Cup of Nations as a bit of a penalty saving wizard.

The 33-year old Zamalek shotstopper was only introduced into the tournament in the last 16 against Cote d’Ivoire, following injury to first choice goalie El-Shenawy.

Gabaski went on to save from Eric Bailly in the the penalty shoot out to send Egypt through to the quarter finals.

He repeated his penalty heroics against host nation Cameroon, where he saved two kicks to send them packing.

In Sunday’s final, Senegal were awarded an early penalty after Abdel Monem’s rush challenge brought down Saliou Ciss in the box.

As Liverpool forward Sadio Mane prepare to take it, his club teammate Mohamed Salah, was seen in a conversation with Egypt goalkeeper Gabaski, supposedly telling him where Mane would place his spot kick.

Mane then walked up to interrupt the conversation and asked Gabaski to get back in the post for the kick to be taken, which he eventually saved.

Gabaski has now revealed the exact details of how that conversation unfolded, per MBC Egypt.

“Salah told me: Mane would shoot to the right side, he is coming now because he knows what I am saying.’ “Mane said to me: ‘I will shoot on the left,’ then Salah replied ‘Let’s see.’” [MBC Egypt

Mane did score when it mattered most in the shoot out though, converting the last spot kick to give Senegal their first ever Africa Cup of Nations title following an enthralling 0-0 draw after extra time.