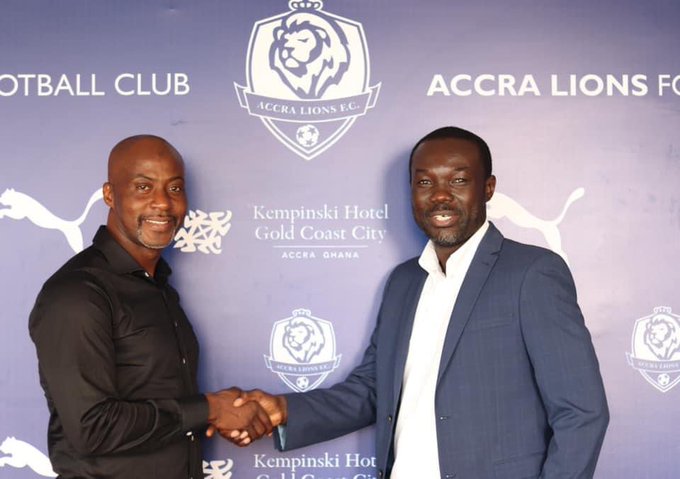 Tanko, who holds a Uefa License A coaching certificate, has agreed on a contract and will start work immediately in the new role created to reflect the future ambitions of the club, the Ghana Premier League debutants announced Wednesday.

The 44-year-old’s role will see him shape the activities of the senior team while giving a laser-guided focus to the methods of the club’s academy.

The former assistant coach of the Ghana national team, the Black Stars, will also lead the restructuring of the process of recruitment at the club.

Speaking about his appointment, Tanko said: “I am extremely proud and happy to be taking the role of the Sporting Director of Accra Lions Football Club on this exciting project.”

“I would like to thank the club, the leadership, management, players and supporters for the warm welcome and for placing their faith in me.

“I want to assure them that together with all my colleagues, we will do our utmost best to consolidate the solid and continuous growth at the club.”

Accra Lions CEO Nana Obiri Yeboah said: “We are absolutely pleased that Tanko has agreed to work in the role of a Sporting Director of the club. His immense playing and coaching experience makes him the right person for the job at this important phase of the club. We are certain he will bring his playing experience and coaching knowledge to bear at Accra Lions and help us achieve our cherished ambitions.”

Tanko is a seasoned trainer having coached at the highest levels in world football including working with professional clubs in Germany and Japan. He was the assistant coach of German sides Freiburg and FC Cologne before travelling to Japan to work with Urawa Red Diamonds.

The former striker worked with the Cameroonian senior national team as their assistant coach before leaving to occupy a similar position with the Black Stars in 2017. Two years later, he was named the head coach of the Black Meteors, Ghana’s Under-23 side, and led them to the Under-23 Africa Cup of Nations in Egypt. He subsequently served as the head coach of Ghana’s home-based national team, the Local Black Stars, for five months before he was replaced.

Tanko played for King Faisal Babies before moving to Germany 1994 where he played for giants Borussia Dortmund before ending his playing career at Freiburg.